Is Golden Knights Key to Win in Game 2 Speed? 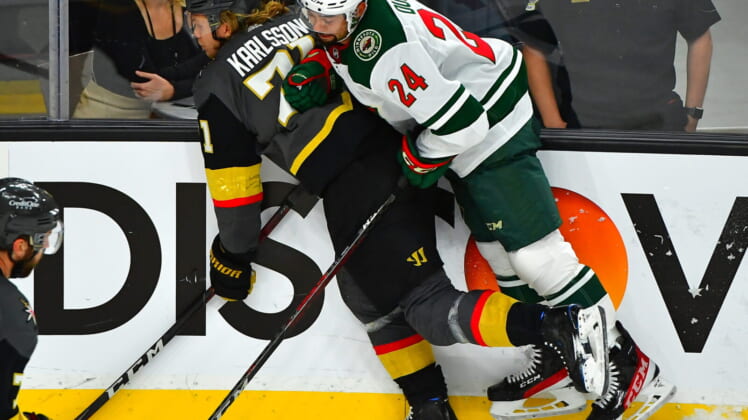 The Vegas Golden Knights were stunned in Game 1 at T-Mobile Arena as future Hall of Fame goaltender Marc-Andre Fleury put on another exhibition but the home team lost its edge primarily around speed.

Despite having 42 shots on Sunday afternoon, the Vegas Golden Knights could never solve Minnesota Wild goalie Cam Talbot – eventually succumbing in overtime 1-0. Vegas is now in a precarious position as a loss tonight means they travel to the Xcel Energy Center needing to win four of the next five games, a tall order considering the Golden Knights have never won in Minnesota.

Thus, tonight’s game is crucial and feels like a must-win for a Golden Knights team expected to contend for the Stanley Cup, not fall in the first round. The good news is that for long stretches of Game 1, Vegas dominated, putting the pressure on Minnesota and doing everything except putting the puck in the back of the net.

Taking the positives from those sections of the game, and extrapolating them to tonight’s game, is going to be the challenge for the Golden Knights. If they don’t manage to do that, they’re going to have their backs against the wall as they fight for their lives.

Playing to their Strengths

It’s clear what the Golden Knights consider to be the key to finding that same level of domination: playing with speed. It was the phrase most often mentioned by players and coaches alike prior to Game Two and that point has certainly been hammered into the players’ brains.

“We gotta play fast, as soon as we get the puck we gotta go north with it, super-fast,” said forward Jonathan Marchessault at Tuesday’s press conference. “It comes back to playing fast. We have 40 wins this year doing that”.

Head coach Peter DeBoer expanded on that and said that the difference between the dominant first period and the more-even consecutive two in Game 1 was that the Golden Knights played fast and used their speed to their advantage. Getting back to that could mean the difference between winning and losing Game Two, or the entire series.

“We gotta stop focusing on what they do and focus on what we need to do to be successful,” DeBoer said this morning.

Filling the Max Pacioretty-sized Hole in the Lineup

With the Golden Knights staying quiet on the status of Max Pacioretty, it remains to be seen if he will slot into the lineup tonight. Their lack of natural goal scorers has only been amplified during his absence and they’ve been forced to explore alternate solutions for that winger spot on the top line alongside Chandler Stephenson and Mark Stone.

In Game 1, Tomas Nosek started in that spot before being swapped with Alex Tuch mid-game. Tuch provides more of an offensive punch in that spot as he can use his speed and size to get inside the collapsed Wild defense. Once he was playing alongside Stephenson and Stone, the trio did manage to produce a few scoring chances though generally they were outplayed to a higher degree than with Nosek.

The Importance of Striking First

The Golden Knights had a 31-3-2 record when scoring first this year and getting that first goal has been crucial for their success. In Game 1, they could never get that opening goal that would force Minnesota to take more chances, resulting in mistakes the Golden Knights could then expose.

Getting that first goal will be key for Vegas tonight as they look to even the series up. If they can get another stellar performance from goalie Marc-Andre Fleury, they can’t afford to waste it with another pathetic offensive performance.

An easier way to get that first goal would be for the powerplay to find its mojo and start connecting. The results in Game One were disappointing as the unit went 0-3, continuing the trend that has plagued the team all season long. Working towards a fix there would go a long way.

The puck is dropped at 7 PM local time tonight as Vegas plays host one more time.