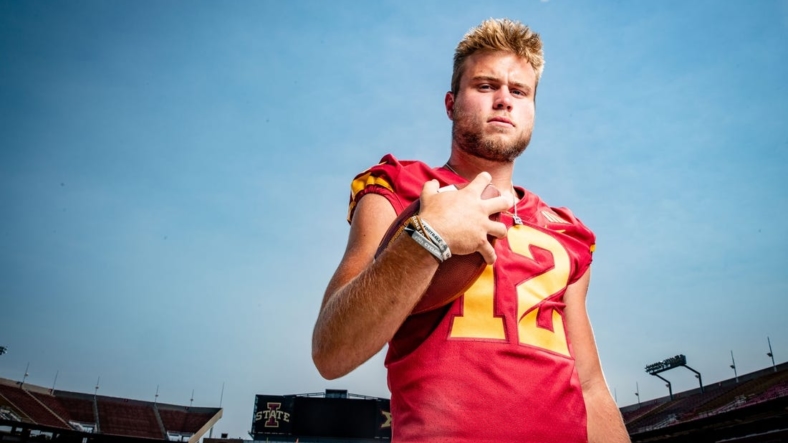 Iowa State could use a fresh start and the Cyclones should receive that in several ways as the season begins.

“We still think we have some solid depth and you’re going to need it,” Iowa State coach Matt Campbell said. “We’ll see when the lights come on and you have to go play.”

Iowa State and Southeast Missouri each are breaking in a new starting quarterback.

“It’s definitely a different mindset going into this,” Dekkers said. “There are certain parts of my game that are underrated that people haven’t seen because I haven’t been on the field (very much).”

Dekkers said he has altered his body to be more sleek after shedding some pounds. With nutrition and weight training, “I’ve completely transformed my body,” he said.

The Cyclones don’t want much change from defensive end Will McDonald IV, who’s a preseason All-American. A redshirt senior, he already holds the school career record with 29 sacks.

Paxton DeLaurent, a 6-foot-5 transfer from Central Methodist, won the quarterback battle to be Southeast Missouri’s starter. He unseated CJ Ogbonna, who started every game last year for the Redhawks.

“Paxton is a lot more athletic than you would think being so long and tall,” offensive coordinator Jeromy McDowell said. “He can process in a hurry and that allows him to anticipate throws and use all his weapons.”

Southeast Missouri coach Tom Matukewicz said there will be situations when multiple quarterbacks will be critical parts of the game plan. Despite being a newcomer, DeLaurent has looked comfortable.

“He has stepped up several times and manages our offense well,” Matukewicz said.

This will be the first meeting Southeast Missouri-Iowa State meeting. It’s only the third time the Redhawks will take on a team from the Big 12 Conference, with the other two resulting in 2014 and 2017 losses to Kansas State.