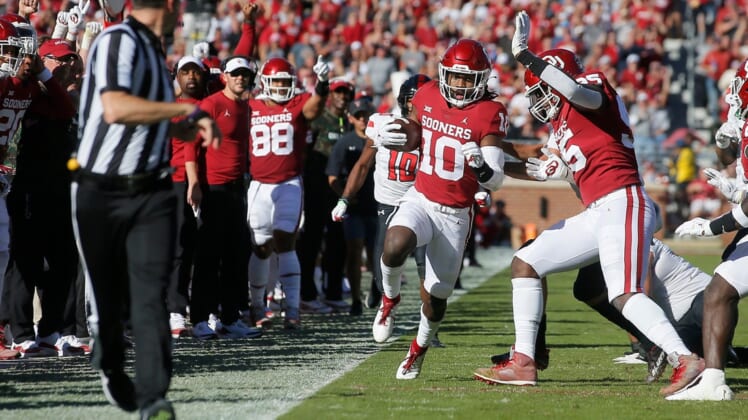 There aren’t a lot of areas where Bryan McClendon’s experience matches Bob Stoops’.

But heading into the Alamo Bowl, between McClendon’s Oregon squad and Stoops’ Oklahoma one, McClendon has Stoops beat in experience serving as an interim head coach.

The Ducks’ passing game coordinator and wide receivers coach gets another chance after Mario Cristobal took over at Miami earlier this month.

“Knowing they trust me to be able to do that, it means a lot,” said McClendon.

While McClendon at least expected to be coaching in a bowl game, Stoops did not.

But when Lincoln Riley left for USC, Stoops left the golf course to reassume the spot he held from 1999-2016 before stepping down in the summer of 2017, clearing the way for Riley to be elevated into the role.

Several players remain after Stoops recruited them before leaving the Sooners.

Oklahoma safety Pat Fields is one.

Fields and several other players said playing for Stoops in the game adds to the motivation.

“Being able to play for him, especially my last game, it’s almost a movie-type moment,” Fields said. “Especially with everything that’s gone on. So it’s gonna be huge. I’m gonna love doing it.”

It’ll also give Stoops a chance to coach his son, Drake, a redshirt junior receiver for the Sooners, and work alongside his other son, Isaac, who is a student assistant.

Both teams have had several players opt out of the Dec. 29 game in San Antonio.

It has been difficult for Oregon to prepare for the Sooners, given all of Oklahoma’s personnel changes among the defensive front seven.

After the game, Stoops will give way to Brent Venables, a former long-time Oklahoma assistant who spent the last decade as Clemson’s defensive coordinator.

The Sooners are making their first Alamo Bowl appearance. Oregon is 1-1 in the bowl.

The teams’ last meeting came in 2006, a controversial 34-33 Ducks’ home win that turned on a pair of replay reviews that went against the Sooners in the final two minutes and resulted in a one-game suspension of both the on-field officials and the replay official.