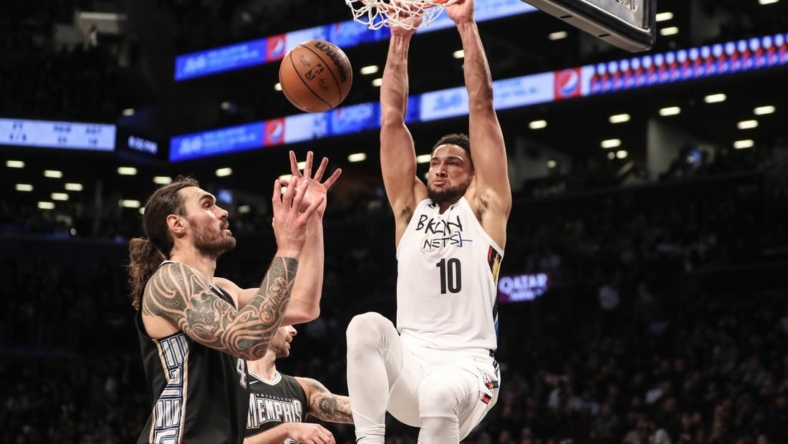 Ben Simmons is coming off his best showing for the Brooklyn Nets since being traded from the 76ers, Simmons heads into Tuesday’s return to Philadelphia feeling good even while anticipating the reaction from 76ers’ fans.

“In Philly? Come on now, I know what’s coming,” Simmons said. “That’s part of the game. Philly fans, one thing about Philly fans is they are incredible. They are diehard Philly and they are everything Philly, whatever it is. I respect that about the city. It’s a sports town.”

Given their injury woes, Philadelphia will not be necessarily focused on the return of Simmons, who averaged 15.9 points in 275 regular-season games for them before making his last appearance with the team in Game 7 of the 2021 Eastern Conference semifinals.

The 76ers will be without star Joel Embiid with a left mid-foot sprain Saturday night and will miss at least two games.

Already without James Harden for another two weeks because of a strained right foot, the Sixers lost Tyrese Maxey to a broken left foot Friday, and then Embiid injured his foot Saturday after colliding with teammate Georges Niang in the second half of a 112-109 loss to the visiting Minnesota Timberwolves. Tobias Harris (sore left hip), Furkan Korkmaz (knee) missed Saturday’s game, and defensive specialist P.J. Tucker — who often guards Brooklyn star Kevin Durant — left that game due to an unspecified injury.

Simmons is averaging 7.9 points in his first 12 games with the Nets, who obtained him from Philadelphia before last season’s trade deadline along with Seth Curry when Harden sought a trade. When the Nets played in Philadelphia on March 10, Simmons sat on the bench as he missed the final two months with a back injury.

“I was 18 years old coming into Philly, so it’s really the only place I’ve lived as an adult,” Simmons said. “So I have a lot of love for that city. People don’t know that, but a lot of my best friends are from Philadelphia. My brother still lives in Philadelphia. So regardless of the situation, whatever happened, happened. But I got a lot of love for that city still, so I look forward to going down there and playing.”

Simmons started slowly by averaging 5.2 points in his first nine games, but in his past three, the former No. 1 overall pick is averaging 16 points, 8.7 rebounds and five assists while making 84.6 percent (22 of 26) of his shots.

On Sunday, he helped the Nets get their sixth win in nine games by scoring 22 points on 11-of-13 shooting and a team-high eight rebounds in a 127-115 win over the visiting Memphis Grizzlies. Simmons’ efficient showing was part of a Brooklyn performance in which they shot 60.2 percent with a season-high 33 assists.

“I expect this from Ben,” Durant said. “So when he plays well, I’m not going to get excited about it.”

Durant scored 26 points, making it 17 in a row with at least 25 points while Kyrie Irving finished with 14 in 26 minutes in his return from a team-imposed suspension that lasted eight games.