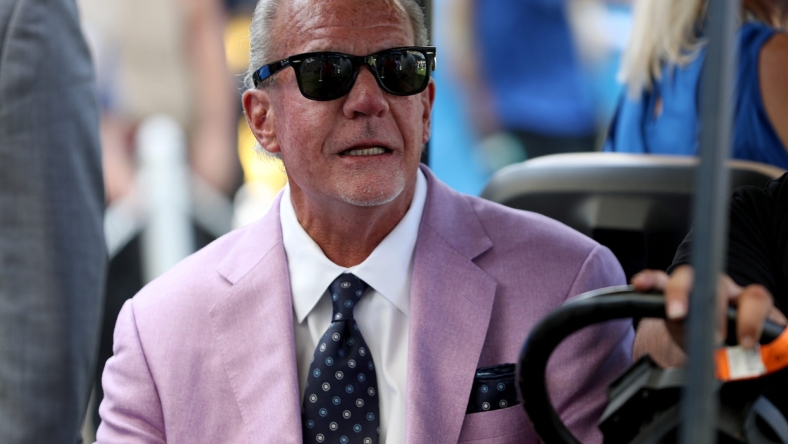 Indianapolis Colts owner Jim Irsay is not happy with new claims by NFL observers that the team is tanking the rest of this season in the hope of scoring a high-value selection in next April’s NFL Draft.

The Colts made an absolutely bold and stunning move earlier this week in regard to their head coach position. After a 3-5-1 start in his fifth season leading the team, the Colts fired head coach Frank Reich. Yet, that wasn’t the true shocker on that day from the team.

Related: NFL standings – Where do the Colts land in the division after Week 9

Reich was on the hot seat in recent weeks so his dismissal was not unexpected. However, the team decided to hire former team great, and current ESPN analyst Jeff Saturday as their new HC. Saturday will take on the role with zero meaningful coaching experience, and that was the true stunner from Monday.

That is on top of the fact that they have also benched starting quarterback Matt Ryan in favor of 2021 sixth-round pick Sam Ehlinger. So then it’s understandable that some around the league and in their fanbase think the organization has given up on this season to land a top draft pick.

However, after Saturday’s introductory press conference on Tuesday, owner Jim Irsay told The Athletic that notions of the team tanking are utter folly and “absurd.”

“That’s the most absurd thing I’ve ever heard, that we’re tanking. That’s bullsh**. We’re in this thing; 9-7-1 get’s us in, no question about it. . . . We’re not tanking the season. Whoever says these things, that we’re not playing Matt because [of an effort to tank], that’s all bullsh**. That’s not true. . . . We’re going to do what it takes to win. I don’t know who people think we are, they don’t know us. We don’t tank in Indianapolis.”

The Colts are currently in second place in the AFC South and are two games out of a 2022 NFL playoff spot. They will be back in action on Sunday to face the Las Vegas Raiders at 4:05 PM ET.