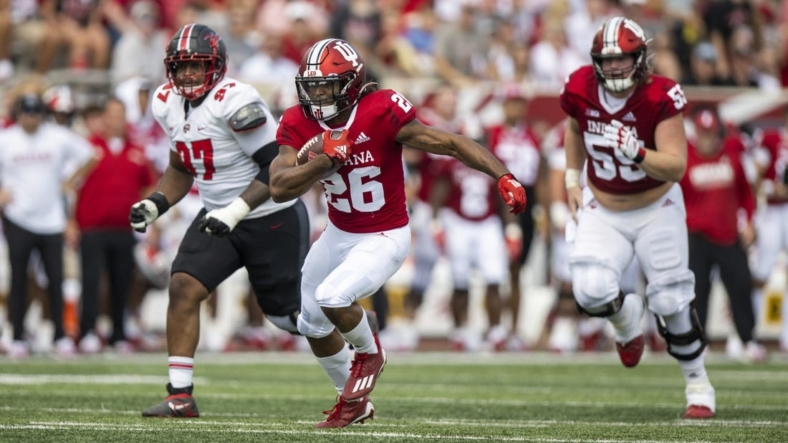 Charles Campbell kicked a 51-yard field goal in overtime after Indiana erased an 11-point deficit in the second half to beat Western Kentucky 33-30 on Saturday afternoon in Bloomington, Ind.

Brayden Narveson had a chance to get Western Kentucky (2-1) on the board in the extra period, but his 39-yard field goal attempt was blocked by Jaylin Williams.

Connor Bazelak’s 4-yard touchdown strike to Cam Camper with 47 seconds remaining and his two-point conversion pass to Donaven McCulley knotted the game at 30-30.

Indiana’s ensuing kickoff went out of bounds, however, setting WKU up at its own 35. Quarterback Austin Reed’s 19-yard scramble and a pass interference penalty helped the Hilltoppers get into enemy territory, but Naveson’s 44-yard field goal went wide right as time in regulation expired.

Bazelak finished with 364 yards and two touchdowns on 33-for-55 passing, with Camper snagging eight catches for 93 yards and a TD.

Reed completed 33 of 43 passes for 329 yards with three touchdowns (two passing, one rushing) and an interception. Kye Robichaux ran for 135 yards on just 14 carries, and Malachi Corley hauled in eight catches for 77 yards for WKU.

Campbell’s 32-yard field goal pulled the Hoosiers within 17-13 with 12:13 left in the third, but WKU proceeded to go on a nine-play, 72-yard march to push the lead back to 11 thanks to Reed’s 1-yard rushing touchdown.

Narveson made a 34-yard field goal with 47 seconds left in the first half to send Western Kentucky into the break with a 17-10 lead. Reed was stellar through the first 30 minutes of action, completing 20 of 25 passes for 225 yards and two touchdowns.