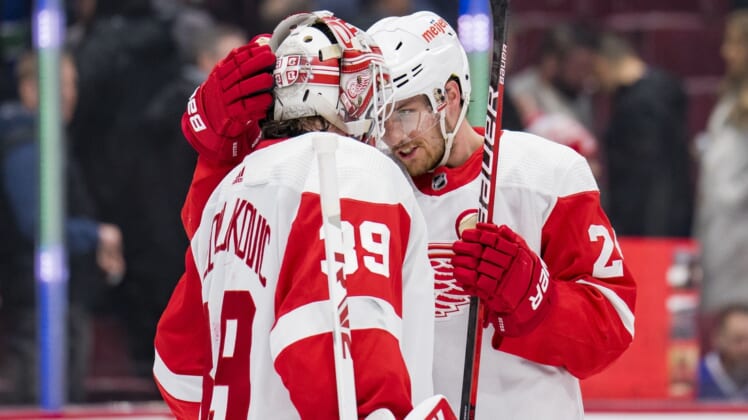 When a performance brings up the names of a pair of Hall of Famers, it’s bound to be a masterpiece.

Nedeljkovic and Co. will look to build on that Saturday in Seattle against the expansion Kraken.

It was Nedeljkovic’s second shutout of the season and the fifth of his NHL career. He was 1-5-1 in his previous seven decisions.

Pius Suter scored the lone goal for the Red Wings, who had lost their previous game 7-5 in Edmonton.

“It’s big. It’s one that we can look back on as the year goes on now and kind of tell ourselves we can play in these low-scoring kind of games,” Nedeljkovic said. “We can play good defense, and I think we did play some really good defense (Thursday). We gave up some chances, but they’ve got some high-end players, so they’re going to get their chances — and pucks were hitting me.”

Nedeljkovic said he hopes the Red Wings can carry that over to Seattle.

“We just gotta take this energy that we have right now, and this swagger we kind of have, and get back to playing with some swagger,” he said. “I think (Thursday) guys were making plays and we were confident with the puck and with what we were doing.”

The Kraken, losers of 12 of their past 14 games, would like to discover that confidence.

They returned home from a 1-3-1 trip with a 4-1 loss to two-time defending Stanley Cup champion Tampa Bay on Wednesday.

Seattle’s Yanni Gourde, selected from the Lightning in the expansion draft, scored an early power-play goal, but Tampa Bay controlled the game the rest of the way.

With the Kraken having the second-fewest points in the league, they traded forward Calle Jarnkrok to Calgary for three draft picks Wednesday. Defenseman Mark Giordano, the Kraken captain, was honored for recently appearing in his 1,000th game but didn’t play Wednesday because he’s also likely to be dealt to a contender before Monday’s NHL trade deadline.

“It’s part of the business; we understand the situation we’re in,” Kraken forward Jordan Eberle said. “Guys are going to get traded. … It should really be no surprise because you’ve been on losing teams. This is what happened, so that’s definitely no excuse. … It’s frustrating. Obviously you can try and find as many excuses as you want; but, at the end of the day, we’re still trying to build here, and we’ve got 20 games to see who wants to be here.”