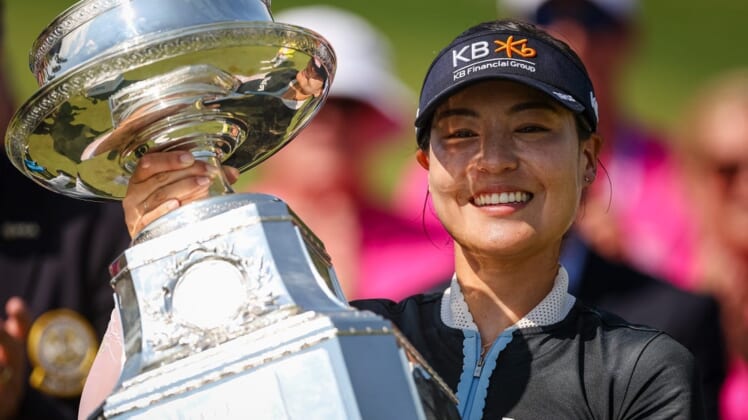 Despite shooting a second straight 3-over-par 75 and blowing her chance at a wire-to-wire victory, In Gee Chun sank clutch putts down the stretch to outlast Lexi Thompson on Sunday in a dramatic finish for her third major title in the KPMG Women’s PGA Championship at Bethesda, Md.

Chun’s 5-under 283 finish completed a roller-coaster day at Congressional Country Club that began with her giving up a lead that was as large as seven shots a day earlier. The South Korea native instead shook off four bogeys on the front nine to play flawlessly over the final six holes and rally from a two-stroke deficit against Thompson.

Chun, 27, capped her comeback by salvaging par on the tournament’s 72nd hole after her second-shot approach took an unfortunate bounce and rolled off the green. She putted from the fringe to get within 5 feet.

That put the focus on Thompson, the Florida native who has endured a series of close calls in the past. Thompson missed her birdie putt from 12 feet. After Thompson tapped in for par, all that was left was Chun to sink her par putt for her fourth career LPGA victory.

Thompson (73) and Australia’s Minjee Lee (70) both finished a shot off the lead at 4 under.

“It just means a lot because I didn’t have any wins the last, almost 3 1/2 years, so I really appreciate it,” a visibly emotional Chun said through tears.

After tying a tournament record with an 8-under-par 64 on Thursday to grab a five-shot lead after the first round, Chun led by six strokes after a second-round 69. Her lead was down to three after Saturday’s third-round struggles, and by the fourth hole Sunday she was already looking up at Thompson.

Chun caught Thompson on the pivotal 16th, when she birdied the par-5 hole while Thompson had her fourth bogey in a six-hole span. Since winning her only major at age 19 at the 2014 Kraft Nabisco Championship, it marked the ninth major in which the 27-year-old finished in the top three without victory.

Lee, this year’s U.S. Open champion, fought her way into contention by tying for the second-lowest round of the day in windy conditions.

“After my start, I really just wanted to get back to even, but I hit some really good shots out there and gave myself little birdie opportunities despite a little bit harder conditions,” Lee said. “I’m quite happy with how I finished.”

Rounding out the top five was 19-year-old Atthaya Thitikul of Thailand, who finished two shots back at 3 under after a 73 Sunday. Five players tied fir fifth at 1 under — including Japan’s Nasa Hataoka (low-round 69), Australia’s Hannah Green (75), and South Koreans Hyo Joo Kim (71), Hye-Jin Choi (76) and Sei Young Kim (76).