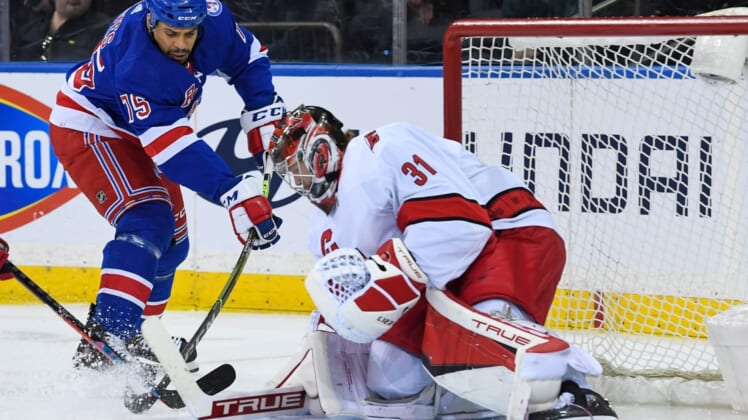 Seth Jarvis scored 1:02 into the third period to break a tie and the Carolina Hurricanes went on to a 4-2 victory against the host New York Rangers in a battle between the top teams in the Metropolitan Division on Tuesday night.

Andrei Svechnikov, Jordan Staal and Sebastian Aho also scored for the Hurricanes, who were outplayed for most of the first two periods. Brady Skjei provided two assists against his former team and Aho, who recorded an empty-net goal with 5.8 seconds remaining, also had two assists.

New York’s three-game winning streak ended despite Chris Kreider scoring with an extra attacker with 1:38 to play for his 50th goal of the season.

Goalie Frederik Andersen stopped 28 shots for the Hurricanes, who had won just two of their previous five games entering the night.

This was the first game for the Rangers since they clinched a playoff berth Saturday. K’Andre Miller scored their only goal until Kreider’s late tally, while goalie Igor Shesterkin made 21 saves.

Miller opened the scoring by posting a goal 63 seconds into the second period, jumping into the play and finishing against Andersen.

Carolina’s first goal came at 13:38 of the second when Svechnikov and Jarvis went on a rush into the New York zone. The puck went beyond the end line, but Svechnikov shoved it back toward the crease from behind the net and it bounced off Shesterkin’s skate and resulted in a goal.

After Jarvis put Carolina ahead, Staal’s goal came at 6:42 of the third period to create a two-goal edge. He has six goals across the last four games, including a hat trick Sunday against the Anaheim Ducks.

Jarvis and Staal both have 14 goals this season.

The Rangers outshot the Hurricanes by 14-8 in the first period, but they failed to convert on either of their two power plays.

Carolina has won two of three meetings against the Rangers this season, with another matchup slated for April 26 in Raleigh, N.C.