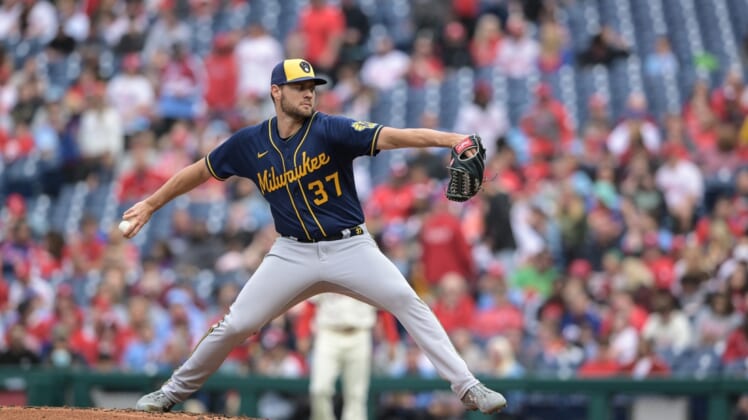 Willy Adames added two hits for the Brewers, who scored four runs in the fifth inning and one in the sixth to erase a 3-0 deficit.

Brewers starter Adrian Houser (1-2) tossed six innings and gave up five hits and three runs to go along with three strikeouts and one walk.

Josh Hader pitched a scoreless ninth for his seventh save in seven opportunities.

Nick Castellanos had a double, sacrifice fly and two RBI for the Phillies.

The Phillies went ahead 1-0 in the first inning when Harper and Castellanos hit back-to-back doubles.

Herrera opened the third with a triple and scored on a bloop single by Jean Segura for a 2-0 advantage. The ball was dropped by Kolten Wong, but was ruled a single by the official scorer. Castellanos added an RBI sacrifice fly to center for a three-run lead.

The Brewers managed only two hits through the first four innings, singles by Adames and Andrew McCutchen.

The Brewers took a 4-3 lead when Adames scored after an errant throw to second by J.T. Realmuto.

Renfroe launched a solo homer with one out in the sixth for a 5-3 advantage.

Kyle Schwarber singled to lead off the seventh for the Phillies but was stranded there when they went down in order.

Hader shut down the Phillies in order in the ninth.