How to Watch the 2022 World Series Live

Watch the Philadelphia Phillies and Houston Astros battle it out in Game 4 of the MLB World Series here. Game begins tonight at 8:03 pm ET on Fox. 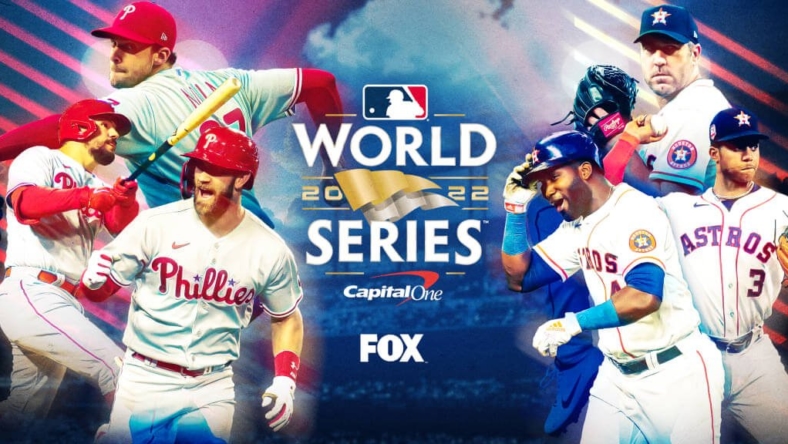 The Philadelphia Phillies and the Houston Astros are battling it out so far in the 2022 World Series. After the Phillies dominated the Astros in Game 3 the Houston fan base is hoping for a different outcome tonight. If you’re searching for How to Watch the World Series, game 4 takes place in Philadelphia on Wednesday, November 2 at 8:03 PM ET.

With Bryce Harper smashing a few home runs during this series Houston’s pitching staff is eager to figure out a solution. The Phillies currently lead the series 2-1 and are hoping to capture another win tonight. With this being Harpers first appearance to a World Series and the Phillies first time back since 2009, Philadelphia fans are starting to taste that victory parade.

After three hard fought games and a comeback for the ages in game 1, you won’t want to miss the rest of the 2022 MLB World Series. See just how you can watch all the action live with a sports streaming service.

Where can you stream the MLB World Series?

What channels show the World Series?

The last time the Phillies were in the World Series, you had to watch it on cable — but not anymore. You can pay a monthly fee and watch the 2022 World Series on Fox through services, such as Sling TV, Hulu + Live TV, FuboTV, DIRECTV STREAM, or YouTube TV.

Watch the World Series on Sling TV (our preferred service)

Sling TV is our preferred service for watching the 2022 World Series between the Phillies and the Astros. For only $40 per month, you can watch it with Sling’s Blue plan on Fox. Or, for $15 more, you can subscribe to the Sling Orange & Blue plan, which costs $50 per month for nearly 50 different channels.

Sling TV is one of the most affordable streaming services you’ll find to watch this best-of-seven series between the Phillies and the Astros. Our favorite part? For a limited time only, the streaming service is offering half off your first month. This offer applies to all Sling TV plans, meaning you can watch the entirety of the 2022 World Series for just $20 with the Blue plan or $2.50 with the Orange & Blue plan.

You don’t want to miss out on this special offer before baseball season comes to a close.

Other ways to watch the 2022 World Series