“D.C. United are a club rich with tradition and ripe with promise,” Ingram said in a release. “I am excited about the recent investments the club has made to build towards a sustainable future and the decisions they have taken at the leadership level both on and off the pitch. Additionally, the club’s values have been on full display recently and they align with my beliefs. 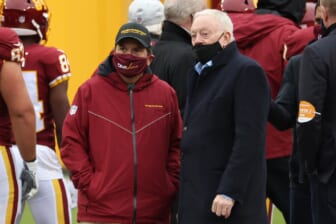 “I’ve spent quite a bit of time in the DMV (District of Columbia, Maryland, Virginia) as a professional athlete as well as had the fortune of attending D.C. United matches and the passion of the sporting community and fanbase here is second to none. I look forward to playing an active role in the ownership group to help our club compete for more major trophies and deepen our impact in the community.”

Jason Levien and Steve Kaplan, co-chairs of D.C. United, were quick to welcome Ingram to the club.

“We first spent time with Mark in 2019 and we have built a relationship founded on a set of shared values and a love of sport and community,” Levien and Kaplan said in a release. “Mark’s track record at the highest levels of both collegiate and professional sports and the perspective that he brings is a valued addition to our ownership group and we look forward to having him as our partner.”

Ingram, who won the Heisman Trophy in 2009, signed a one-year, $2.5 million deal with the Houston Texans on March 24.