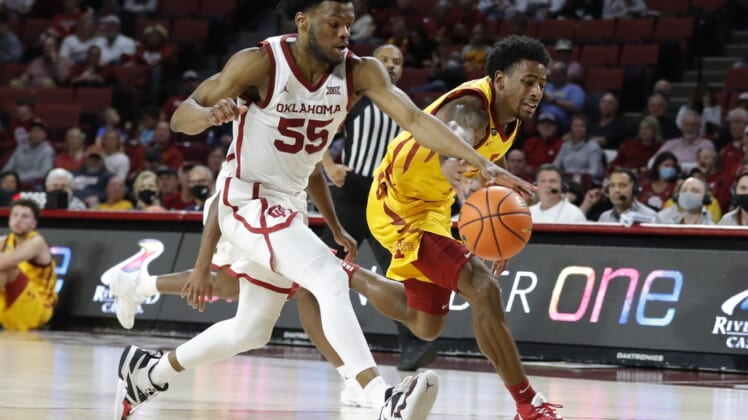 The win was the Sooners’ third over a top-15 opponent this season.

By the time the Cyclones hit another shot, there was less than a minute remaining and the game had been decided. Iowa State missed five shots during the Sooners’ 14-0 run.

It was a stunning reversal. The Cyclones had turned things around early, trailing by seven midway through the first half before storming back to take a 36-32 lead at the break and leading 47-36 early in the second half.

Oklahoma was strong from beyond the arc in the first half, hitting 6-of-10 3-pointers. But after halftime, the Sooners took over the game by attacking the basket.

Oklahoma shot just a pair of 3-pointers after the break, hitting one, and going 17 of 20 from inside the arc to shoot 81.8 percent from the floor in the second half.

The Cyclones shot 55.8 percent from the floor, their second-best shooting performance of the season, but couldn’t keep pace with the Sooners.

Oklahoma finished 61.7 percenet from the field, its best shooting game since January 2016.

Tanner Groves added 16 points and Elijah Harkless 13 for the Sooners.

Izaiah Brockington and Tyrese Hunter had 20 each for the Cyclones. Brockington scored 16 of his points in the first half but was just 2 of 7 from the floor after the break.