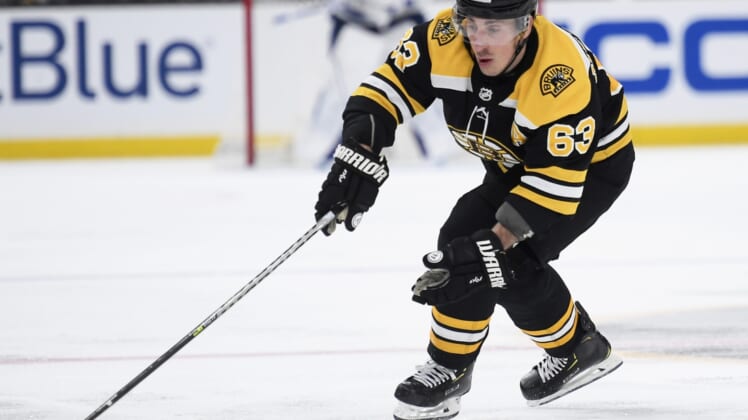 The Boston Bruins will look to remain on the winning track Tuesday night when they host the Toronto Maple Leafs in a pivotal Atlantic Division game.

The Original Six rivals boast identical 41-19-5 records entering their only meeting at Boston this season.

In their only matchup of the season, host Toronto won 5-2 on Nov. 6.

Boston improved to 14-2-1 since Feb. 19 with Saturday’s 6-3 home win over the New York Islanders. It was the Bruins’ fourth win in a row.

“It’s a division rival, and it does matter a little bit more in the standings because of where we are,” Bruins coach Bruce Cassidy said. “We haven’t talked at all about the standings other than moving up as the year went on, and now we’ve been able to accomplish that. We’ll see how that plays out down the stretch. We control what we can control, and we’ve done a good job of that.”

Against the Islanders, Brad Marchand and Taylor Hall both had a goal and two assists, while Erik Haula, David Pastrnak (one goal, one assist each) and Charlie McAvoy (two assists) also had multiple points for Boston.

“I think we’ve found a lot of different avenues to the two points every night without relying on one thing,” Cassidy said. “We do rely on good team defense, making the difference-making plays at certain points. … (The Islanders) made one at the end of the first period to get back in the game, but we came out in the second and scored the next goal.”

Patrice Bergeron said he felt “fine” in his return to the lineup following a four-game absence due to an elbow infection.

In his 1,200th NHL game, the Bruins’ captain registered an assist on Marchand’s goal. Bergeron ranks third behind Ray Bourque and Johnny Bucyk in games played in Bruins history.

“It’s special. Especially being an Original Six team, a storied franchise,” Bergeron said. “Being around and having the chance to meet those guys, Bucyk, Bourque, (Bobby) Orr, and all the greats, it’s an honor and something I don’t take lightly to be a Boston Bruin.”

Toronto moved to 6-3-1 since March 7 and drew even with the Bruins for third place in the division following a 5-2 victory Sunday over the Florida Panthers.

John Tavares had two power-play goals, Auston Matthews added his 48th goal of the season, and Mitch Marner had three assists to become the fastest player in Leafs history to reach the 300-assist milestone (411 games).

“(Tavares) is as good as anybody in hockey below the hash marks, so for him to get on those two pucks was great,” Leafs coach Sheldon Keefe said. “Great plays by Mitch, great finishes by John. … (Marner) is a difference maker and makes everybody around better.”

Petr Mrazek, who made 34 saves against the Panthers, has back-to-back wins after allowing 20 goals in his previous five appearances.

“It shows he’s a battler, he competes and he believes in himself,” Keefe said. “He was outstanding again tonight. That’s two in a row now that he’s looked like the goalie that he is and has been throughout his career, so it’s great that he’s bounced back and responded well to adversity. That’s a terrific sign and a testament to his character.”

In the Nov. 6 Toronto-Boston game, Matthews scored two goals, Tavares had two goals and an assist, and Marner had a goal and three assists.