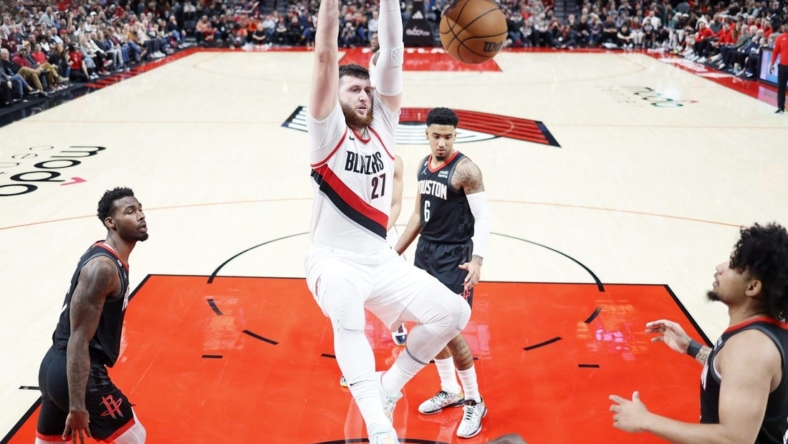 The Portland Trail Blazers will aim to continue their surprisingly solid start when they host the Memphis Grizzlies on Wednesday night.

The Trail Blazers have won five of their first six contests after winning just 27 games a season ago when their eight-season playoff streak came to an end.

Portland will be without Damian Lillard (right calf) for the second straight game, although this time it will be a more treacherous absence with Ja Morant off to a stellar start for the Grizzlies.

The first outing without six-time All-Star Lillard went well. The Trail Blazers notched a 125-111 win over the Houston Rockets on Friday.

Jusuf Nurkic dominated the interior with a season-best 27 points on 12-of-17 shooting and he also collected 15 rebounds. Anfernee Simons was hot from the perimeter with 30 points and seven 3-pointers.

It was the second time in three games that Simons made seven 3-pointers. Portland led by as many as 18 points and never trailed against the Rockets.

“It’s easy for guys to get relaxed, but where we want to get to, you can’t do that,” Simons said. “But all in all, I think we played a good game, closed it out in the end, made a run and opened the lead up.”

Simons played in Lillard’s point guard role against Houston and rookie Shaedon Sharpe moved into the starting lineup and scored 14 points in 29 minutes.

The 19-year-old Sharpe was nervous prior to his first start since high school. Sharpe sat out last season as a freshman at Kentucky and was selected seventh overall by the Trail Blazers.

“But once tipoff happened, (I) just started relaxing, just played the game I know how to play within the team and everything,” Sharpe said. “Just tried to get my teammates the ball — offensive and defensive side.”

Sharpe is averaging 13.3 points over the past three games and 9.3 overall.

Portland went 3-1 against Memphis last season and now the Grizzlies arrive in the Pacific Northwest on the heels of back-to-back road losses against the Utah Jazz.

The Grizzlies were without standout shooting guard Desmond Bane (right ankle) on Monday. He is averaging 24.2 points but his performance over his last three games was much higher — a 33.7 average and 60.7 percent (17 of 28) from 3-point range.

Memphis hasn’t yet firmed up Bane’s availability for Wednesday’s game.

Morant scored 37 points on 12-of-18 shooting Monday to raise his average to 33.3 points per game. He topped 30 for the fourth time in six games played.

However, Morant wasn’t pleased about a contest in which the Grizzlies were 6 of 26 from 3-point range (23.1 percent) and trailed by as many as 25.

“Everything was on us,” Morant said. “We weren’t communicating, rotating, and we were just giving them easy looks.”

Dillon Brooks added 19 points for the Grizzlies but was just 6 of 16 from the field.

The game got away from Memphis in the second quarter when it was outscored 38-18 and left staring at a 61-44 halftime deficit.

“We lost our spirit there in the second quarter and they took advantage,” Grizzlies coach Taylor Jenkins said.

Portland guard Josh Hart entered concussion protocol after the win over Houston and his availability is uncertain.