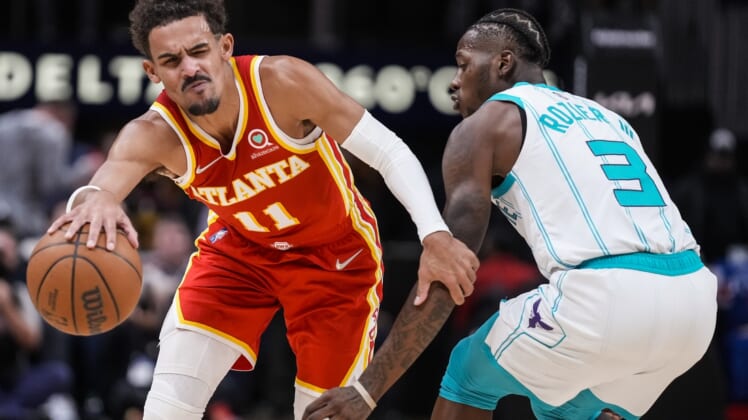 This might be Terry Rozier’s time of the year, which could be exactly the boost the Charlotte Hornets need.

Rozier has taken his performances to another level recently as the Hornets try to sort out inconsistency.

They might need more from Rozier when the Atlanta Hawks, who have a high-scoring backcourt featuring Trae Young, visit Charlotte on Wednesday night.

Rozier has reached 30 or more points four times since Feb. 27, pushing his scoring average to 19.7 points per game.

“I feel like every year in March, maybe it’s the birthday, I’m just feeling good,” Rozier said. “I kind of take off.”

Rozier’s production is impressive but pales in comparison to what Young is achieving. He posted 46 points Monday night in a 122-113 home victory against the Portland Trail Blazers. That came a day after he had 47 points against Indiana.

Young has at least 25 points in seven of eight games this month.

Atlanta and Charlotte are clinging to the final two postseason spots in the Eastern Conference. This will be their last matchup of the regular season.

The Hawks, who have a .500 record for the first time in three months, have won five of their past seven games, including the past three.

Atlanta coach Nate McMillan credits some of that success to Young “playing faster and looking to attack.” That suggests the high-scoring guard simply isn’t settling for long-range jumpers.

Wednesday night’s game starts a season-long five-game homestand that is bound to be crucial for the Hornets.

“It’s the NBA. There are good teams,” Charlotte coach James Borrego said. “But if we’re following the gameplan, have effort, we’re prepared and trust each other defensively, I can live with that.”

Atlanta came from 15 points down to beat Portland, so both clubs are fresh off notable comeback victories.

Charlotte has allowed 115 or more points in its last five games.

The Hornets have won their past two games, but it has been nearly two months since they’ve put together a three-game winning streak.

They lost the most recent meeting with the Hawks, 113-91, at home on Jan. 23. The teams split two games in Atlanta earlier in the season.

Slow starts often have haunted the Hornets. Somehow, they recovered after surrendering 41 points in the first quarter to the Thunder.

“It’s not the start we wanted, but the response was there,” Borrego said.

John Collins has missed the past two games for Atlanta because of an injured finger.

As for Charlotte’s roster, the signing during the weekend of guard Isaiah Thomas to a second 10-day contract might give the Hornets more options in the backcourt if they’re aiming to mix things up in terms of dealing with Young.