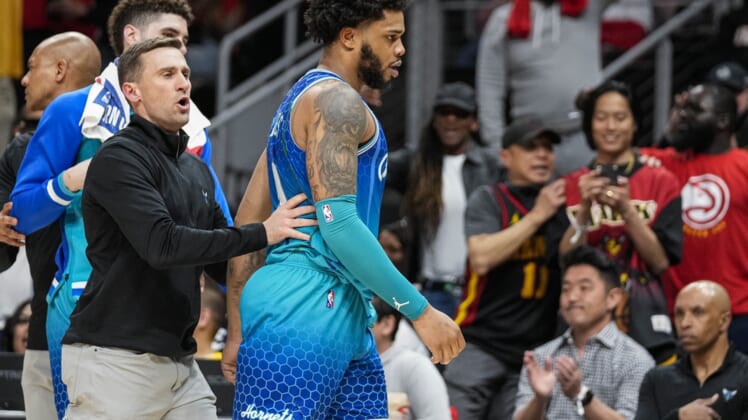 Charlotte Hornets forward Miles Bridges apologized Wednesday after throwing his mouthpiece into the crowd and hitting a young fan.

During the Hornets’ 132-103 loss against the host Atlanta Hawks in Eastern Conference play-in game, Bridges was ejected with 6:39 remaining in the fourth quarter after receiving two technical fouls.

As he made his way to the locker room, a nearby fan was loudly taunting him. Bridges flung his mouthpiece toward the fan, but it wound up hitting a girl two seats over. The girl told the Charlotte Observer she is 16 years old, though she declined to give her name.

Bridges was contrite when addressing the media later.

“I was aiming for the guy that was screaming at me and it hit a little girl,” Bridges said. “So that’s definitely unacceptable on my part and I take full responsibility. …

“That’s out of character for me. You’ve been around me; I don’t act like that or ever flash out like that. So that was definitely wrong, a lot of emotions and hopefully I can get in contact with the young girl and sincerely apologize to her and do something nice for her, but that’s definitely on me.”

He added that he wouldn’t fight any punishment handed down by the NBA.

“I was upset about a call, a couple of calls really,” Bridges said. “I let my temper get the best of me. It was definitely the wrong thing to do.”

Bridges, 24, averaged 20.2 points, seven rebounds and 3.8 assists in 80 games, all starts, this season. He had 12 points, four rebounds and four assists on Wednesday as the Hornets’ season ended with the play-in defeat.