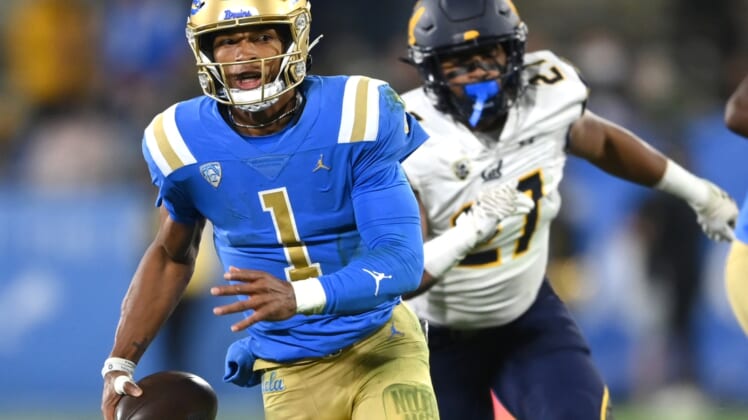 Nov 27, 2021; Pasadena, California, USA; UCLA Bruins quarterback Dorian Thompson-Robinson (1) runs for 17 yards and a first down against the California Golden Bears in the second half at the Rose Bowl. Mandatory Credit: Jayne Kamin-Oncea-USA TODAY Sports

Tuesday’s Holiday Bowl in San Diego was the latest bowl game to be called off amid the pandemic, with UCLA unable to compete against No. 18 North Carolina State due to COVID-19 protocols.

UCLA made the announcement roughly 5 1/2 hours before the game was scheduled to kick off at Petco Park.

The UCLA football team is unable to participate in tonight’s San Diego County Credit Union Holiday Bowl due to COVID-19 protocols within the Bruins’ program. pic.twitter.com/rHXEmGv9gl

The Bruins’ defensive line group was “decimated” by COVID-19 and did not have enough players able to play, according to a report from The Athletic.

“Heartbroken to not be able to compete one more time this season,” NC State football’s Twitter account posted Tuesday. “We were informed a short time ago that our opponent would be unable to play this evening.”

The Holiday bowl was the fifth game to be canceled due to COVID-19, following the Fenway Bowl, Military Bowl, Hawaii Bowl and Arizona Bowl. The Gator Bowl was in limbo after Texas A&M backed out, but Rutgers was added as a replacement to face Wake Forest.

Also, the Sun Bowl was in limbo after Miami pulled out. But when Boise State dropped out of the Arizona Bowl on Monday, Central Michigan moved from the Arizona to Sun to keep the latter bowl game intact.