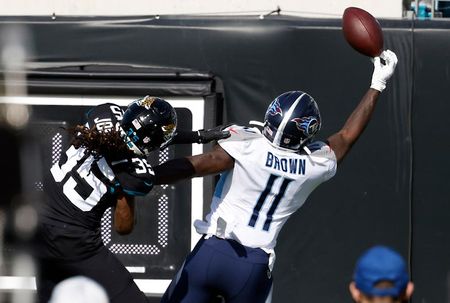 Derrick Henry rushed for 215 yards and two touchdowns on 26 carries to lead the visiting Tennessee Titans to a 31-10 victory over the Jacksonville Jaguars on Sunday.

The Titans (9-4) maintained their lead in the AFC South, beating the Jaguars (1-12) for the seventh time in their past eight meetings, and clinched their fifth consecutive winning season.

Henry surpassed 100 rushing yards in a game at Jacksonville for the first time.

Tennessee’s Ryan Tannehill completed 19 of 24 passes for 212 yards and two touchdowns to finish with a 131.2 passer rating.

Tannehill’s first touchdown — a 37-yard pass to A.J. Brown in the first quarter — came on a flea-flicker where Henry pitched the ball back to him. Brown caught seven passes for 112 yards on nine targets, and Geoff Swaim caught Tannehill’s other touchdown pass.

Defensive tackle Doug Costin recovered a fumble by Corey Davis that led to a 53-yard field goal by Aldrick Rosas, cutting Tennessee’s lead to 7-3 with 3:27 left in the second quarter.

But the Titans answered with a five-play, 75-yard drive. Each play was a run by Henry, capped by a 36-yard touchdown scamper with 44 seconds left in the first half.

Trailing 31-3 with 8:48 left in the third quarter, the Jaguars benched quarterback Mike Glennon (13 for 23, 85 yards, 46.5 passer rating) after he was intercepted by Malcolm Butler, and replaced him with Gardner Minshew II.

Playing for the first time since Week 7 against the Chargers, Minshew directed an 11-play, 60-yard touchdown drive capped by his 5-yard toss to Keelan Cole.

After the Jaguars forced a punt on the ensuing drive, Minshew led a 74-yard march into the Titans’ red zone on six plays. But Minshew threw four consecutive incompletions, resulting in a loss on downs.

Jaguars running back James Robinson finished with 67 yards on 12 carries to become the first undrafted rookie in NFL history to reach 1,000 yards rushing through the first 14 weeks of a season.