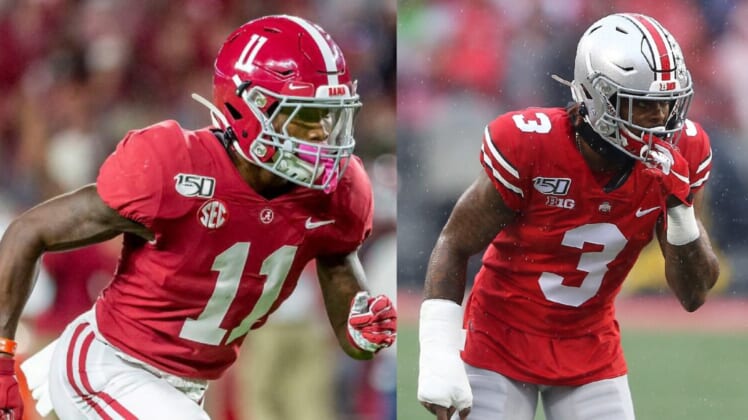 The Las Vegas Raiders were full of surprises in Round 1 of the 2020 NFL Draft as they address two key areas of need but do it with two players in Henry Ruggs III and Damon Arnette which surprised most observers.

The Las Vegas Raiders can walk away from round one of the 2020 NFL Draft knowing they addressed their biggest areas of need drafting speedy wide receiver Henry Ruggs III and cornerback Damon Arnette from Ohio State.

While the Ruggs pick at No. 12 overall wasn’t a surprise to us here, as we suggested they should, the No. 19 pick of Arnette is still a bit of a head-scratcher.

Let’s look at the first round selections and evaluate their value in context of where they were selected and the value of that pick. Also, the No. 19 pick was from the Bears as part of the compensation in the Khalil Mack trade. Yes, the Raiders have a 3rd and 6th to go along with it, but a generational player like Mack requires stricter evaluation based on overall value.

As readers here already know, I am biased and called for the Raiders to take Henry Ruggs III over CeeDee Lamb and Jerry Jeudy. While all three have strengths and weaknesses, Ruggs possesses one trait no coach can teach: speed. Yes, it’s an Al Davisesque pick, but Ruggs is the Raiders version of Tyreek Hill with better hands. For the Raiders to return to championship form, they need to focus on finding ways to beat the Kansas City Chiefs and Patrick Mahomes. Ruggs gives them that outside threat.

“We think that his addition opens up our entire offense,” Mayock said in his post-draft press call on the selection of Henry Ruggs III. “He can run the deep routes. He also gets the manufactured touches, the bubble screens, the jet sweeps. If you force defenses to roll coverage, it opens up our run game. You respect our deep routes and it opens up Darren Waller.”

While it is true that Ruggs’ numbers deep aren’t impressive, in Gruden’s offensive system, with a recharged Derek Carr at quarterback, Ruggs will be the guy the Raiders need him to be. He’s got some work to do but this pick was a good one for the Raiders and they finally have the elusive weapon Carr has needed to build on a young and potentially exciting offense.

Damon Arnette was listed ninth on my list of top cornerbacks in this draft and I slotted him squarely in the second round. The Raiders selecting Arnette at No. 19 was a surprise and a reach. With bonafide first-rounders Jeff Gladney and Kristian Fulton (who slid out of the round) available, it was a surprise. That’s not to say Arnette can’t be a good NFL cornerback but could the Raiders have done better.

General manager Mike Mayock confirmed he tried to trade back several times but couldn’t and felt Arnette would be gone if they didn’t grab him at No. 19. That seems highly unlikely but you never know how teams rank players on their board. Could another team have had him that high on their board?

“The reason he’s not a reach is because of his grade in our system,” Mayock said. “Did I think we could have moved down maybe and still got him? Maybe, but we didn’t want to lose him.”

Arnette is a physical corner who has had issues with immaturity and overly aggressive play. He’s a nice fit for the Raiders since at Ohio State he played in a press-man coverage scheme. He’s got the size and skill but can he keep his attitude in check? That’s one of the big question marks.

Perhaps we should give Mayock the benefit of the doubt as his record last year – with players like fourth-rounder Maxx Crosby – earn him a bit. Yet it still feels like a reach.

While the Raiders still have a 3rd-round and 6th-round pick, and the Bears the 2nd Round from Las Vegas to complete the Khalil Mack trade, at this point, it stands at Mack for Josh Jacobs and Damon Arnette.

While there’s no questioning Jacobs and his ability, running backs have a short shelf life and Arnette is a bit of gamble. At this point, you have to give the edge to the Bears, despite a bit of a down year for Mack in 2019.

But, there’s the rest of the draft so a full evaluation will have to wait.

As my broadcast partner Kelly Kriner said during our draft coverage, the Raiders needed to address the wide receiver and cornerback positions in this draft and they did on Day 1. The selection of Henry Ruggs III is a slam dunk and the jury will be out Damn Arnette for a bit but he’s not a bad pick – albeit a bit early.