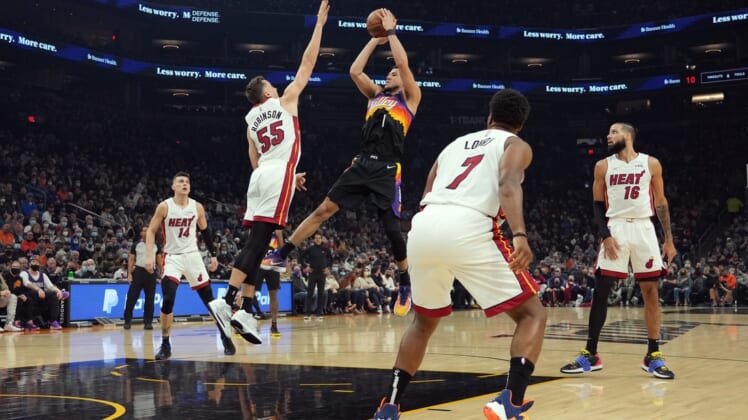 Tyler Herro scored a game-high and season-high 33 points, and Duncan Robinson added 27 points as the Miami Heat knocked off the host Phoenix Suns 123-100 on Saturday night.

Herro’s 33 were two short of Miami’s franchise record for high-scoring game by a reserve. Herro made 12-of-20 shots, including 3-of-4 on 3-pointers in 34 minutes. Robinson made 8-of-16 from behind the arc, also off the bench, and his 27 points were a season high.

The Heat shot a scorching 50 percent from 3-point territory.

The Heat, who never trailed after the first quarter, also got 14 points and a game-high 13 assists from Kyle Lowry. Teammate Omer Yurtseven added a game-high 16 rebounds to go with eight assists and seven points.

Phoenix, the first NBA team to reach 30 wins this season, fell to 17-5 on its home court.

The Suns were led by Devin Booker, who scored 26 points but made just 5-of-15 shots from the floor.

Miami won despite having 12 players on its injury/illness report, including two of its top three scorers in Jimmy Butler (ankle) and Bam Adebayo (thumb).

The Heat dominated the second quarter and went into halftime leading 71-50. Robinson led all first-half scorers with 18 points, making 6-of-10 from deep.

The Heat led 98-79 after three quarters.

Phoenix made a 16-2 run in the fourth, forcing Miami coach Erik Spoelstra to call timeout while leading 100-87 with 8:47 left.