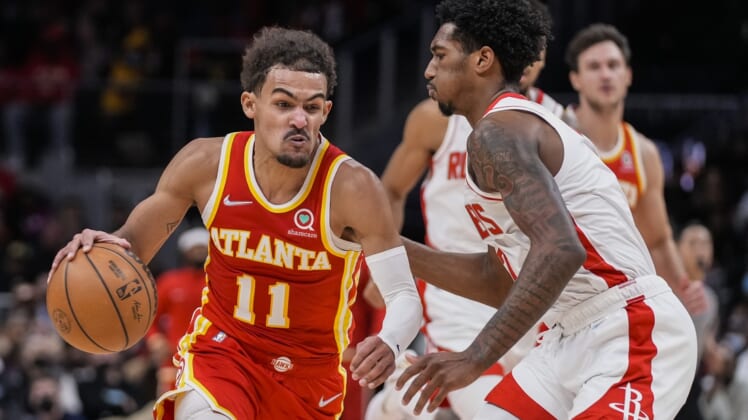 The Atlanta Hawks squandered an excellent chance Friday to improve their positioning for the play-in tournament.

Now they need some help as they close out the regular season Sunday on the road against the Houston Rockets.

Instead, Atlanta enters Sunday’s game against the Rockets (20-61) in ninth place. The Hawks can still secure the No. 8 seed with a win over Houston and hope that the Cleveland Cavaliers lose to the visiting Milwaukee Bucks. The difference is huge, as the eighth seed needs just one win to reach the NBA playoffs and the ninth seed needs two.

The Hawks have lost two of their last three games and are likely to be without John Collins (finger/foot) and Lou Williams (back) against the Rockets, leaving star Trae Young saddled with additional responsibility offensively.

Young has been up to that challenge this season, finishing with 35 points and eight assists against Miami to become only the fourth player in franchise history with 35 30-point games in a single season.

Young concluded Friday leading the league in total points (2,127) and assists (726) while ranked fourth in scoring average (28.4 points) and third with 9.7 assists per game.

Meanwhile the Rockets coughed up a 24-point lead in falling 117-115 on the road to the Toronto Raptors on Friday, their sixth consecutive loss.

Should Houston lose to the Hawks, it would secure the worst record in the league for a second consecutive season and guarantee that the Rockets would pick no lower than fifth in the upcoming NBA Draft.

The three teams with the worst records have the same odds for the No. 1 overall selection. The Rockets picked second last summer after the Detroit Pistons.

The stretch run has yielded some memorable performances for the Rockets’ rookies. Guard Jalen Green had his streak of 30-point games snapped at five against the Raptors while center Alperen Sengun has averaged 14.3 points, 8.8 rebounds and 3.8 assists while starting in place of Christian Wood.

Over the six games following the decision to sit veterans Eric Gordon, Dennis Schroder and Wood, rookie guard Josh Christopher has averaged 14.2 points on 49.2 percent shooting plus 4.7 rebounds, 3.3 assists and 2.0 steals while logging more than 27 minutes.

“The NBA is a long season,” Christopher said after scoring 20 points off the bench at Toronto on 9-for-12 shooting, after missing 9 of 11 shots in his previous game.

“It’s going to be nights where shots don’t go in. When I knock down a few threes I tend to play a lot better. That’s the main thing, making sure I can shoot threes, because that opens up a lot for me.”

Kevin Porter Jr. led the Rockets with 35 points and 10 rebounds against Toronto.