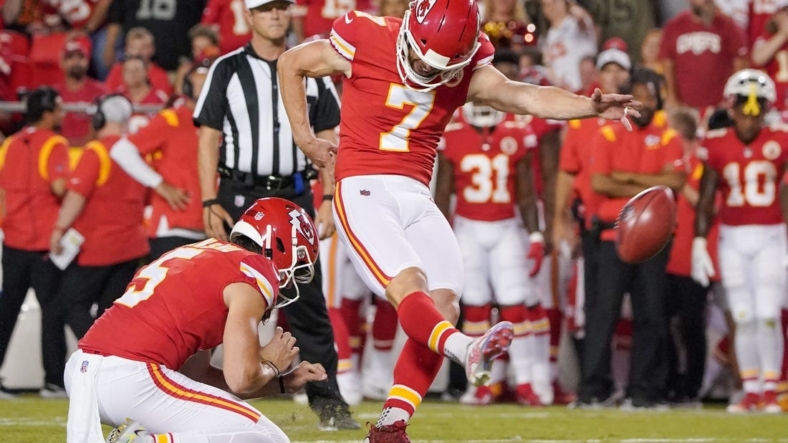 Kansas City kicker Harrison Butker missed practice Tuesday with an ankle sprain as the Chiefs mull options on a short week in the event he can’t play Thursday night.

“I think if it was just a pain thing, I think he’d bear through that,” Reid said. “But he’s got some swelling in there. So, I think it’s a matter of him being functional enough to do it. He’s a tough kid, we’ll just see how it works out.

“We’ve got plan B and we’re working on it,” Reid added.

The Chiefs also placed rookie cornerback Trent McDuffie (hamstring) on injured reserve. The first-round draft pick will have to miss at least four games. McDuffie started and played 49 percent of the Chiefs’ defensive snaps against Arizona in Week 1, recording a tackle.

Butker sustained the injury after his first kickoff against the Arizona Cardinals on Sunday. His left plant foot seemed to slip and twist awkwardly on the kickoff. Butker went to the medical tent and eventually the locker room to get evaluated.

He was successful on the PAT after the Chiefs’ second touchdown but safety Justin Reid came on for the extra point attempt on their third touchdown, missing wide right.

Justin Reid then took over kickoff duties, easily reaching the end zone for a touchback on two of those.