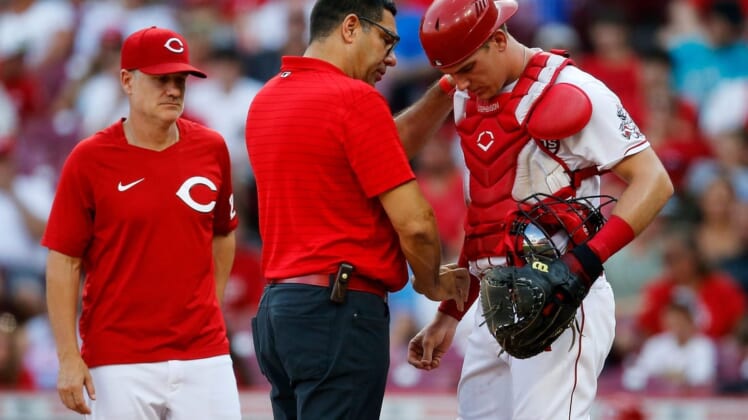 A pair of left-handed pitchers who have overcome pitching shoulder injuries this season square off Saturday when the Cincinnati Reds host the St. Louis Cardinals in the second game of a weekend series.

Left-hander Steven Matz (3-3, 6.03 ERA) will return from his stint on the injured list and make his first start since May in the second game of the series.

Matz was scheduled to pitch Sunday’s series finale against the Reds before the All-Star break before it was rained out. Matz spent two months on the injured list after leaving a start on May 22 with shoulder discomfort.

In his last outing, Matz threw 4 1/3 scoreless innings of two-hit ball in a no-decision for St. Louis’ Triple-A club Memphis in a 2-1 win over Nashville. It was his fourth injury rehab assignment, and his second scoreless start.

Saturday will mark Matz’s second start against the Reds this season. He threw five innings and allowed seven hits and one run to earn the win in a 4-2 St. Louis victory on April 22 in Cincinnati. Matz is 2-0 with a 2.95 ERA in three career starts against Cincinnati.

The Reds will counter with lefty Mike Minor (1-6, 6.21), who began the season on the 10-day injured list with a left shoulder strain before making his Reds debut on June 3 vs. Washington.

Minor will be making his ninth start of the season and will be pitching for the first time in 10 days, allowing five hits and five runs but only one earned over four innings in a 7-6, 10-inning loss to the New York Yankees.

In seven career starts against the Cardinals, Minor is 2-4 with a 5.88 ERA, including four straight losses over five starts dating to his last win over St. Louis with Atlanta on Aug. 25, 2013.

St. Louis catcher Yadier Molina is expected back from his home in Puerto Rico to begin a minor league rehab assignment on his inflamed right knee as soon as Monday, with the hope of a return to the team on Aug. 2.

Molina, who turned 40 last week, was permitted by the club to begin his rehab in Puerto Rico before reporting to a minor league club for games.

“He’s doing what’s necessary to jump right into baseball activities,” Cardinals manager Oliver Marmol said of Molina, who is batting .213 with two home runs and 10 RBIs in 38 games this season. “Maybe a day or two and then he’ll jump into games.”

The Reds will have to do without their starting catcher Tyler Stephenson indefinitely for a fourth time this season after breaking his right collarbone taking a Paul Goldschmidt foul ball just three batters into Friday’s game. Stephenson has already spent three stints on the injured list this season, two with a concussion and one with a broken right thumb.

“It’s kind of a weird thing. He stayed in the game and then tried (to field a ball) and couldn’t throw,” said Tyler Naquin after Friday’s game. “It’s terrible. He was having a great year. I’ve broken a collarbone. It ain’t fun.”