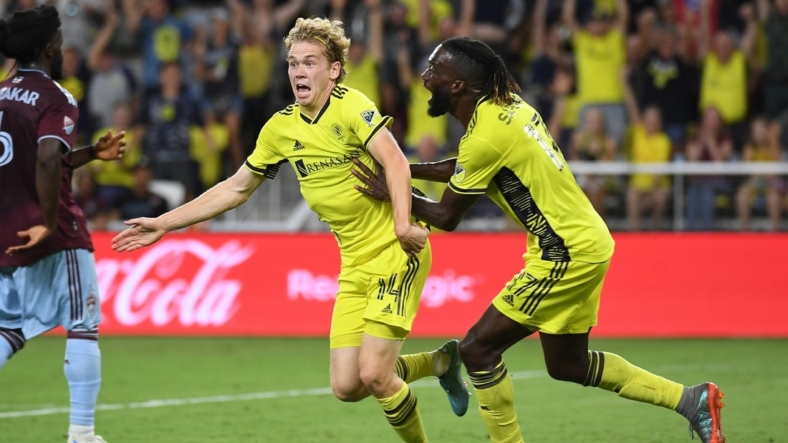 Hany Mukhtar recorded his second career hat trick and Nashville SC pushed its winning streak to a season-high three games with the 4-1 home triumph over the reeling Colorado Rapids on Wednesday night.

Mukhtar scored the match’s first goal via a successful penalty kick in the 29th minute. Then after Colorado’s Gyasi Zardes leveled the contest in the 35th minute, Mukhtar got behind a lazy Colorado back line on 54 minutes and give his side the lead again — and for good.

After Jacob Shaffelburg added a 61-minute insurance goal for Nashville (11-9-9, 42 points), Mukhtar capped his brilliant night by heading home William Yarbrough’s save of Randall Leal’s 75-minute shot for this 19th of the season.

Mukhtar’s only other MLS hat trick came against the Chicago Fire in July 2021 for Nashville, which is has an 11-1 goal advantage over the past three matches following a dismal 0-3-3 rut.

Colorado (8-12-8, 32 points) delivered a solid performance most of the night but seemed to unravel on defense in the second half. Chasing a playoff spot in the Western Conference, the Rapids are mired in an 0-3-2 rut and have been outscored 10-1 while losing two in a row.

Desperate for points, Colorado was tactically the better team through the first 15 minutes of the match. However, the Rapids were also on the wrong end of the first crucial moment of the game when Lucas Esteves fouled Leal on the pursuit — in the box — in the 26th minute.

That earned Nashville an attempt from the spot, where, three minutes later, Mukhtar converted to extend his stretch of recording either a goal or an assist to five consecutive matches.

The Rapids managed to respond six minutes later with something substantial to show for their first-half effort. Off some brilliant passing, starting with Diego Rubio, then to Steven Beitashour, who perfectly placed the ball to Zardes for the finisher that sent the match tied 1-1 at half.