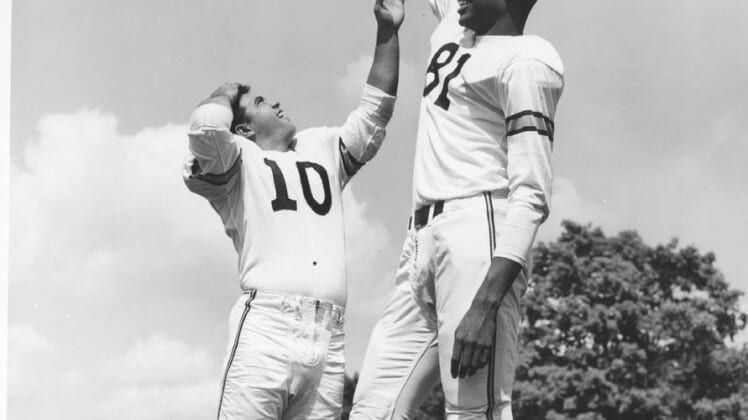 Dawson was MVP of the AFL and spent more than six decades as part of the Kansas City Chiefs as a player and broadcaster, including guiding the franchise to its first Super Bowl victory. He also played for the Pittsburgh Steelers.

“With wife Linda at his side, it is with much sadness that we inform you of the passing of our beloved Len Dawson,” Dawson’s family said in a statement issued by Channel 9 (KMBC-TV) in Kansas City. “He was a wonderful husband, father, brother and friend. Len was always grateful and many times overwhelmed by the countless bonds he made during his football and broadcast careers. “He loved Kansas City and no matter where his travels took him, he could not wait to return home.

On the field, Dawson was known as “Lenny the Cool” and started in Super Bowl I and Super Bowl IV as part of his 14-year run as the team’s No. 1 quarterback.

Dawson led the NFL in completion percentage eight times and was the leader in passing yards and touchdown passes four times.

Dawson became a broadcaster with the Chiefs and had national roles with NBC and “Inside the NFL” behind the microphone.

In January 1970, Dawson led the Chiefs to a 23-7 win over the favored Minnesota Vikings in Super Bowl IV and was the game’s MVP, capping the victory with a 46-yard touchdown pass.

The Chiefs lost Super Bowl I to the Green Bay Packers, 35-10.

Dawson was born into a large family in Alliance, Ohio, and had 10 siblings. He attended Purdue University and debuted as the Boilermakers starter in 1954, playing for a coaching staff that included assistant coach Hank Stram.

He was the fifth overall pick in 1957 to the Steelers, who selected Dawson one spot ahead of Syracuse running back Jim Brown. After toiling as a backup with the Steelers and Cleveland Browns, Dawson requested his release. In June 1962, the Browns let him go.

He’d reunite with Stram, then the AFL Dallas Texans’ coach, thanks to their strong ties at Purdue.

Dawson not only won the starting job and proved Stram’s hunch that he could succeed in pro football was accurate, the Texans won the AFL title that season and Dawson was named Player of the Year. In 1963, the franchise moved to Kansas City with Dawson as a centerpiece.