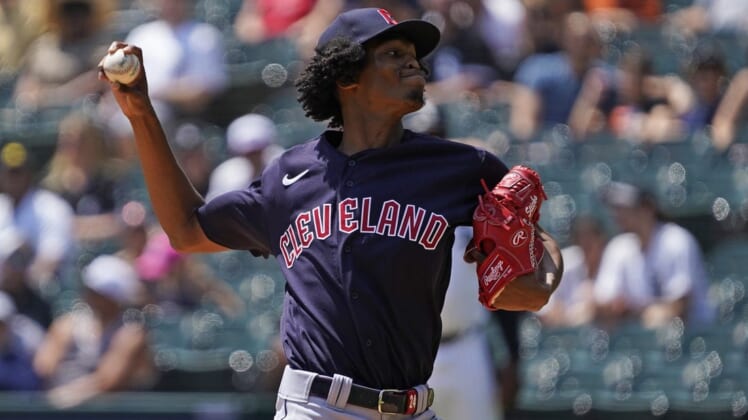 The visiting Cleveland Guardians broke a tie in the ninth inning with three runs against Chicago White Sox closer Liam Hendriks and notched a 7-4 victory in the first game of a split doubleheader on Saturday.

Josh Naylor and Steven Kwan each delivered RBI singles in the ninth inning against Hendriks (1-3), who had made 15 straight scoreless appearances before giving up four hits in the ninth.

Cleveland extended its winning streak to five games after Chicago had tied the game with three runs in the seventh inning.

Trevor Stephan (4-3) pitched 1 1/3 innings in relief for the victory, and Emmanuel Clase retired the Guardians in order for his 20th save.

McKenzie gave up one run on four hits with two walks and four strikeouts over 5 2/3 innings.

Cleveland answered with four runs in the fifth. Steven Kwan doubled in a run before Amed Rosario followed with a two-run single and scored on Jose Ramirez’s sacrifice fly.

The White Sox pulled even with a two-out rally in the seventh, scoring three runs on six hits. Josh Harrison and Yoan Moncada hit back-to-back RBI doubles against Eli Morgan to cut the deficit to 4-3.

Stephan replaced Morgan and yielded Vaughn’s run-scoring single. Chicago then loaded the bases on singles by Jose Abreu and Grandal before Stephan struck out Gavin Sheets to end the inning.

Abreu had two hits and walked to extend his on-base streak to 25 games.