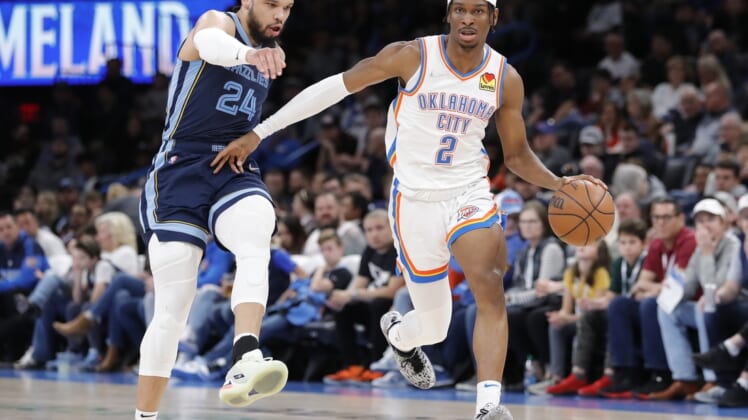 Any questions about how the Memphis Grizzlies would adjust once second-leading scorer Dillon Brooks returned from a 27-game absence have been quickly answered.

Fully recovered from his left ankle sprain, Brooks and the Grizzlies will continue their four-game road trip against the Indiana Pacers on Tuesday in Indianapolis.

The Grizzlies are riding a three-game winning streak after beating the Oklahoma City Thunder 125-118 on Sunday.

Brooks made an impressive return to action in the victory, finishing with 15 points and four assists in 26 minutes.

“I’m really impressed with Brooks,” Memphis coach Taylor Jenkins said. “I thought he settled in great and played really good basketball on both sides of the floor. Just exerting a lot of his force and energy out there. He never backs down, he’s super aggressive.”

The Grizzlies have won 21 of their last 28 road games and began the week with the second-best record in the league at 47-22. Point guard Ja Morant is averaging 27.5 points, 5.8 rebounds and 6.7 assists while shooting 49.3 percent from the field.

Tyrese Haliburton and Buddy Hield each scored 25 points in the Pacers’ 131-128 loss to the Atlanta Hawks on Sunday.

The team’s injury woes have created an opportunity for players such as rookie guard Duane Washington, who tied his career high with 22 points against Atlanta after scoring 19 points against the San Antonio Spurs on Saturday.

“Everybody’s got to take advantage of the opportunities they’re given and prove themselves, just go out here and play as hard as they can. That’s been the biggest thing for us young guys,” Haliburton said. “Sometimes we’re out on the court and the oldest dude’s like 23. That’s just how it is, but we like that. We love that challenge. We all wanted to be in the NBA since we were little kids.”

One of the Pacers’ few active veterans is Hield, who is averaging 19.7 points, 5.4 rebounds and 5.6 assists in 13 games since being acquired from the Sacramento Kings.

Indiana will need a strong shooting night from Hield in order to keep pace with Memphis, which ranks fourth in the league in scoring at 114.5 points per game.

Guard Desmond Bane finished with 21 points in Sunday’s win over Oklahoma City and has scored in double figures in six straight games to start the month.

The Grizzlies’ explosiveness was on display in Friday’s 118-114 win over the New York Knicks, who led by 15 late in the third quarter before Memphis ended the game on a 37-18 run.

“They’ve got a really good team,” Knicks guard RJ Barrett said. “They really know their system. They share the ball. They’re happy for each other’s success, you know what I mean? They’re like a well-oiled machine.”