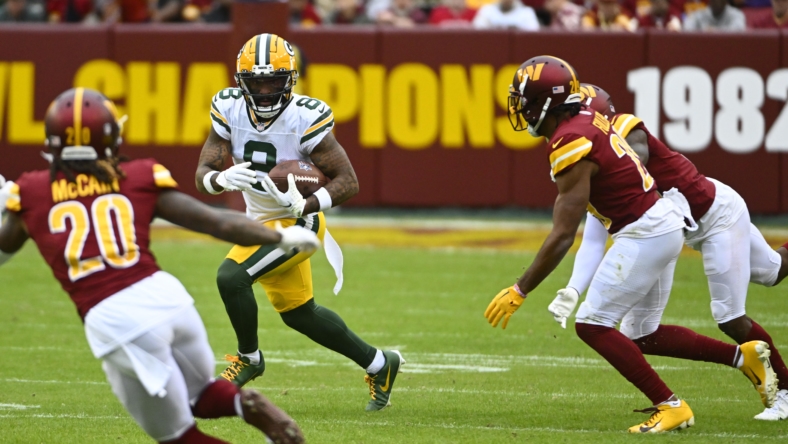 Green Bay Packers general manager Brian Gutekunst has been under fire for his performances in the NFL Draft over the past few years.

What the Packers announced on Tuesday likely won’t change this too much. Green Bay sent a press release announcing that it has released two players from the team’s 2021 NFL Draft class in that of wide receiver Amari Rodgers (third round) and running back Kylin Hill (seventh round).

Rodgers’ release comes a couple days after he lost a fumble on a punt return in Green Bay’s Week 10 win over the Dallas Cowboys. A former star at Mississippi State, Hill was released after seeing action in just two games (one rush attempt) this season.

The 5-foot-9 Rodgers starred at Clemson from 2017-20. He finished his career catching 77 passes for 1,020 yards and seven touchdowns in catching passes from Trevor Lawrence back in 2020.

Green Bay selected the speedster ahead of the likes of fellow wide receivers in that of Nico Collins and Amon-Ra St. Brown, both of whom have played at higher levels throughout their careers.

While Green Bay lacks a ton of depth at wide receiver, it’s not a shock that Rodgers was released. He’s seen action in 98 offensive plays through 10 games, catching four passes for 50 yards. While he had been the Packers’ primary punt returner, a total of five fumbles this season did him in with Green Bay.

As for Hill, he’s been stuck behind the likes of Aaron Jones and AJ Dillon on the Packers’ depth chart. Hill has 11 regular-season rush attempts to his name and has seen action in just 10 games since the Green Bay Packers made him a seventh-round pick in 2021.