And then there were two. Over the course of the past couple weeks, Sportsnaut has been engaging in an interactive Greatest NBA Champion tournament, which pitted the 16-best NBA championship teams in the history of the league against one another in a NCAA-like one-and-done tournament.

There were some surprises along the way, but at the end of the day we have come up with the two-best teams, as voted on by you the readers.

In the other semifinal matchup, the 1986-1987 Los Angeles Lakers of “Showtime” fame defeated the Walt Frazier and the 1972-1973 New York Knicks with 55 percent of the vote. It was a closer than anticipated final tally, but New York remained a strong contender throughout. It upset Bill Russell’s Boston Celtics in the Round of Eight.

In any event, here is the breakdown of the championship matchup. 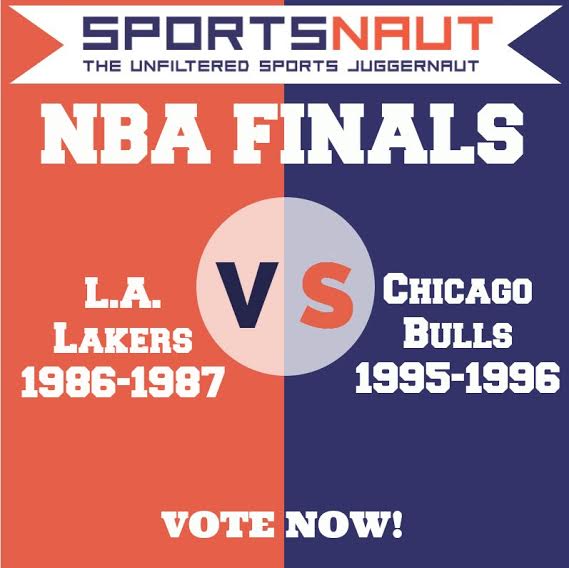 Unlike what we have done in the past, let’s go ahead and give you a position-by-position statistical breakdown in order to help you in your decision-making process in this all-important championship vote.

It’s also important to take a gander at how each of these teams performed in the postseason in route to their NBA championship.

Can’t get much closer than that, aye? In reality, the Lakers and Bulls had identical postseasons in their championship seasons. You will not see a comparison that close if you attempt it about 100 more times.

It’s now up to you to make your vote count below. We appreciate everyone taking part in this interesting project. We will have one final post on the winner of this championship matchup on Thursday prior to the NBA draft. Voting remains open until 10 PM ET on Thursday.