Already the biggest hitter on tour by a considerable margin with his current 45.5-inch weapon, DeChambeau has been tinkering with the long club with a goal of unveiling it at Augusta National on Thursday....

AUGUSTA, Ga. (Reuters) – Bryson DeChambeau is considering using the longest driver allowed by law at this week’s Masters, he said on Tuesday, a club with a 48-inch shaft that could lead to the most ferocious display of long driving ever seen at a tournament.

Already the biggest hitter on tour by a considerable margin with his current 45.5-inch weapon, DeChambeau has been tinkering with the long club with a goal of unveiling it at Augusta National on Thursday.

If he does, the game may never be the same.

“I tested it yesterday for the first time,” he said of the 48-inch driver.

“And we’ve gone through at least three or four iterations of the shaft, and this is the most promising one yet. I did not expect it to work yesterday but it did, and I’m not 100% sure if I’ll put it in play yet just because of the unknown,” he told a press conference.

“It’s so close to the Masters, but if it is an improvement in every facet of launch conditions, then I don’t see why not.”

Two months removed from his six-shot demolition of the field at the U.S. Open, DeChambeau listed the clubs he used for his second shot at the par-five holes at Augusta during a practice round on Monday.

These included a pitching wedge no less at the famous 13th, a hole where Nick Faldo struck a two-iron on his way to victory in the final round in 1996.

A longer shaft allows a player to generate more clubhead speed and to hit the ball further, but few players have even considered using a 48-inch shaft because it is more difficult to strike consistently and accurately.

DeChambeau said that he was generating a clubhead speed of about 143-144mph on the range, a hitherto unheard of figure outside of long driving competitions.

“I really don’t know where the end game is on this.

“But I will say that I am hitting it further now … than the U.S. Open, and I’m trying a driver this week that may help me hit it even a little bit further, so we’ll see.”

But the 27-year-old Texan was quick to observe that no matter how far he smashes the ball he will still need the rest of his game to be sharp to have a chance of collecting the Green Jacket on Sunday.

“As much as I can gain an advantage off the tee, I still have to putt it well and chip it well and wedge it well and even iron play it well, and that’s what I did at the U.S. Open,” he said.

(Reporting by Andrew Both; Editing by Hugh Lawson) 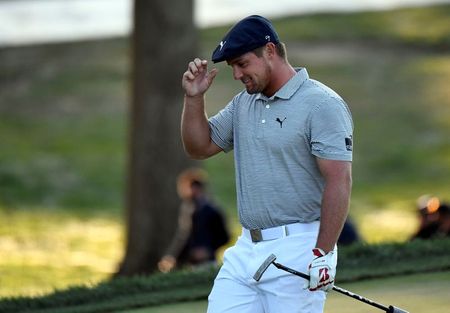