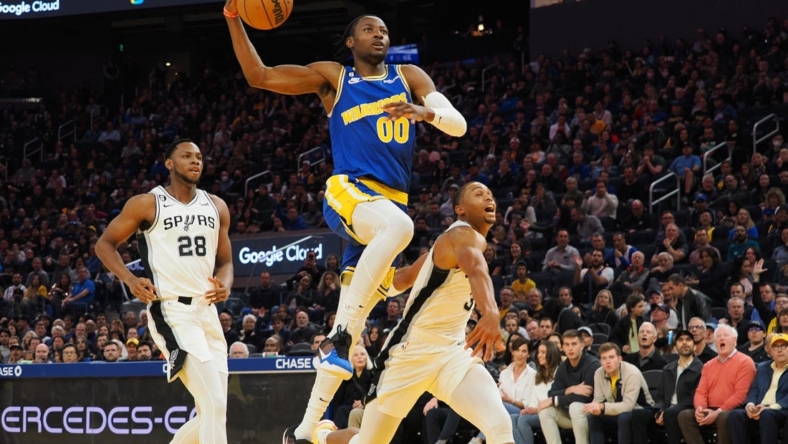 The defending NBA champion Golden State Warriors are 0-7 on the road this season.

One of those losses came on Oct. 25 in Phoenix, and Golden State returns to town on Wednesday night to try to even the slate against the host Suns.

Phoenix blew out the Warriors 134-105 that night in a testy game, as Golden State star Klay Thompson earned the first ejection of his career.

The intensity level should be high again with the Warriors owning a lackluster 6-8 mark after Monday night’s 132-95 rout of the visiting San Antonio Spurs.

Thompson was rested against the Spurs, so Jordan Poole moved into the starting lineup and scored a season-high 36 points on 13-of-20 shooting. Poole made five 3-pointers and had three steals.

It was the second 30-point effort of the season for Poole, who is averaging 17.1 points despite starting just three of 14 games.

“Just being aggressive, playing my game,” Poole said. “We had a (loss on Sunday) and we needed to come out and get a win. That’s kind of where my head was.”

Stephen Curry should be fresh after playing a season-low 27 minutes against San Antonio. He also scored a season-low 16 points as his average dropped to 31.5.

Curry has scored over 30 on nine occasions this season, topped by efforts of 47 and 40. He had 21 points in last month’s loss to the Suns.

Phoenix has lost two straight and four of six since getting off to a 6-1 start.

The Suns completed a 1-3 road trip with Monday’s 113-112 loss to the Miami Heat. Phoenix blew a 13-point fourth-quarter lead.

Suns coach Monty Williams was displeased by the loss and frustrated by the free-throw disparity — the Heat shot 25 and Phoenix had just four attempts.

“That is hard to swallow … a physical game like that, where everybody’s bumping, we only get four free throws,” Williams said. “It’s becoming really hard to swallow. You feel like you can’t even talk about it because you’re going to be fined.”

Devin Booker scored 25 points against the Heat and has topped 20 points in 10 of the club’s 13 games. Booker had 34 points and seven assists in last month’s win over the Warriors.

Cameron Payne had back-to-back stellar performances in Paul’s first two absences by averaging 22.5 points and 6.0 assists. But he was just 4-of-17 shooting against the Heat while scoring nine points in 31 minutes.

Duane Washington Jr. provided punch on the bench with 21 points as he received 19 minutes with Landry Shamet (concussion) sidelined.

“It was a great opportunity to show the preparation and work I’ve put in,” Washington said. “I felt like I was ready, and my teammates and coaches believe in me, and I was able to knock down some shots.”