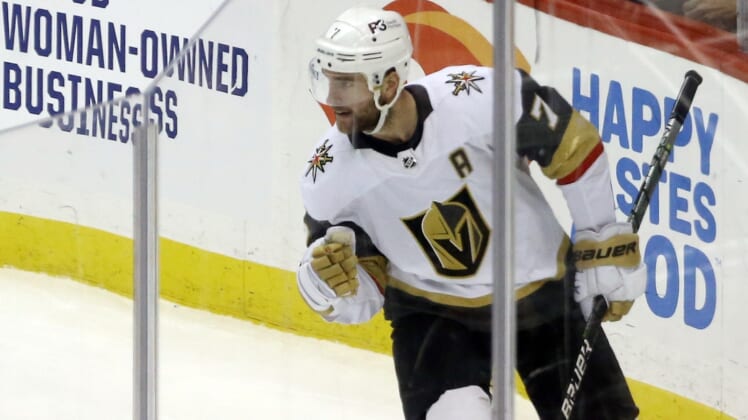 The injury-plagued Vegas Golden Knights will try to snap a three-game losing streak when they visit the Columbus Blue Jackets on Sunday night.

Vegas entered the weekend clinging to third place in the Pacific Division with the Edmonton Oilers, Vancouver Canucks and Anaheim Ducks all nipping at its heels in the race for the division’s last guaranteed berth in the Stanley Cup playoffs.

The Golden Knights are 4-8-1 in their past 13 games and started their five-game trip by losing three straight games in regulation.

Left wing Max Pacioretty joined that list when he left with an undisclosed injury during the second period of a 5-2 road loss to the Pittsburgh Penguins on Friday. The 33-year-old led the Golden Knights with 24 goals last season and has 15 in 29 games in 2021-22. However, he already has missed two large chunks of the season with injuries, including one that required wrist surgery.

The Golden Knights have 26 goals over their past 13 games, including four in the first three games of the trip. Vegas has scored two goals or less nine times during the 13-game stretch and is 4-for-50 on the power play in its past 19 games.

Vegas coach Peter DeBoer said his team can’t use injuries as an excuse for its slump.

“You can’t let that creep in,” he said. “These are the cards were dealt. We’ve got a good enough group in there to scratch and claw and win games, and we’ve got to get on the right side of it here.”

The Golden Knights rallied from a 2-0 first-period deficit to tie the Penguins on goals by Jack Eichel and Alex Pietrangelo in the second period, and they outshot Pittsburgh 37-17 over the final two periods. But the Penguins got a goal by Mark Friedman early in the third period to regain the lead. Bryan Rust made it 4-2 with a power-play goal with 5:11 remaining, and Evan Rodrigues sealed the win for the Penguins with an empty-netter with 2:17 to go.

“We’re going to concentrate on the really good things we did tonight,” DeBoer said. “We outplayed for long stretches a really good team over there. It’s a challenge, but that’s the ups and downs of a season. We’ve got a lot of hockey left, and we got a chance to finish this road trip strong with a couple wins.”

Columbus, which is fifth in the Metropolitan Division with 61 points, kept its slim playoff hopes alive with a 3-2 shootout victory over the visiting Minnesota Wild on Friday. Zach Werenski scored the tying goal with 32 seconds left, and Elvis Merzlikins, who had 36 saves through overtime, stopped all three shootout tries by the Wild.

Yegor Chinakhov scored the winner in the second round of the shootout for the Blue Jackets, who snapped a four-game losing streak. They are 13 points behind the Washington Capitals for the last playoff spot in the Eastern Conference.

“We hung around in the game against another really good team and found a way,” Columbus coach Brad Larsen said. “Elvis was outstanding. We knew he was going to have to be huge for us and he was.”

However, the win might have been costly for Columbus, as forwards Jakub Voracek, who is second in scoring with 43 points including a team-best 40 assists, and Patrik Laine, who has 22 goals and 42 points, both left the contest with left leg injuries and did not return.