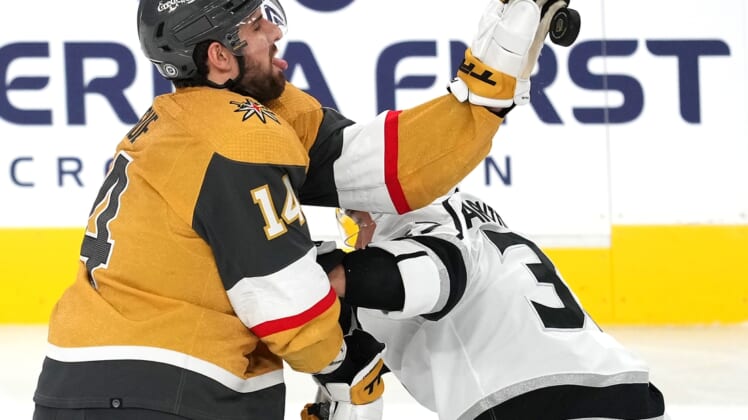 After suffering five consecutive regulation losses for the first time in franchise history and briefly falling below the Western Conference playoff line, the Vegas Golden Knights could exhale a little bit after defeating the Florida Panthers 5-3 on Thursday.

But only a little.

The Golden Knights, who leapfrogged back ahead of the Dallas Stars by one point for the second wild-card spot, next face the Los Angeles Kings in a Saturday matinee in Las Vegas. And they’ll likely have to do it without center Jack Eichel, who didn’t play in the final period after taking a MacKenzie Weegar shot off his right hand.

Eichel has five goals and five assists in 15 games since returning from neck surgery following a Nov. 4 trade with the Buffalo Sabres. He did not take part in the team’s optional practice on Friday. Golden Knights coach Peter DeBoer said there were still no results back on Eichel’s injury evaluation. He called Eichel “doubtful” for Saturday’s game while also saying it was “a huge concern.”

The Kings blanked the visiting San Jose Sharks 3-0 on Thursday and hold a six-point edge over Vegas for second place in the Pacific Division with 19 games to go for both teams. The Edmonton Oilers, who have two games in hand, are four points behind Los Angeles in third place — two points ahead of the Golden Knights — entering Friday.

So Saturday’s contest is an important one when it comes to the Pacific standings.

After getting outscored 23-11 during the five-game losing streak, including yielding a season-high seven goals in Tuesday’s 7-3 loss at Winnipeg, DeBoer praised his team’s ability to bounce back and defeat the Panthers. Florida entered the contest with an Eastern Conference-best 88 points.

“I’m proud of our group, our resiliency all year,” DeBoer said. “I know we had a tough road trip from a win-loss record but the group never quit, they never mailed it in. They worked every one of those games. It wasn’t perfect but they stuck with it.

“I haven’t had a group face as much adversity as this group has had thrown at them. They keep showing up and giving us what they had. I’m proud of them. That was a hell of a gutsy win tonight.”

Goaltender Logan Thompson finished with 33 saves while picking up just his second career NHL win. Thompson allowed three goals on 10 shots in relief of Laurent Brossoit at Winnipeg and was making his fourth career start. Florida came into the contest leading the league with 4.10 goals per game.

“Obviously, it’s a big team win and I think it’s a big win for the goaltending department,” Thompson said. “I know I haven’t been great. Every goalie coach in their mom’s basement has let me know that. I hold myself really accountable, and I owe it to the team to give ourselves a chance to win.”

Los Angeles is 5-2-1 over its last eight games and owns the best road record in the Pacific Division (18-8-5). The Kings have won two of the three previous meetings with the Golden Knights this season, including a 4-3 overtime win in the last meeting on Feb. 18 in Las Vegas when Adrian Kempe scored twice, including the winner in OT.

Thursday’s win snapped a three-game losing streak against San Jose for the Kings, who were outscored 15-5 in those contests. Anze Kopitar scored what proved to be the game-winner with a power-play goal in the second period.

“I mean, whoever is saying they’re not checking the out-of-town scores is probably lying,” Kopitar said. “We know what kind of position we’re in and obviously we know what we’ve got to do. … We have (19) games left. It’s very doable, but we’re going to have to make it happen.”