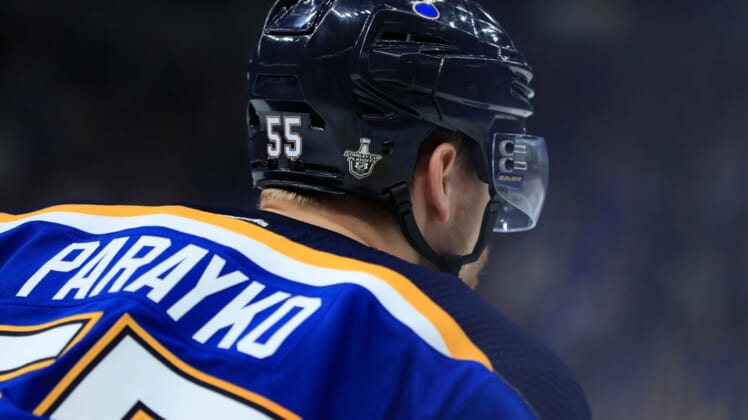 Jack Eichel had two goals and an assist to lead the Vegas Golden Knights to a season-ending 7-4 road win over the St. Louis Blues on Friday.

The loss ensures that the Blues (49-22-11, 109 points) will finish third in the Central Division. St. Louis will face the second-place Minnesota Wild in the first round of the Stanley Cup playoffs.

The Blues may have already been looking ahead to the postseason, as they were outshot by a 45-18 margin on Friday. The Golden Knights’ seven goals matched the most scores allowed by the Blues in any game this season.

For Vegas (43-31-8, 94 points), Friday’s win is a small consolation within an otherwise disappointing season. Ravaged by injuries all over the roster, the Golden Knights will miss the playoffs for the first time in their five-year franchise history.

Jonathan Marchessault, William Karlsson, Max Pacioretty, Zach Whitecloud each had a goal and an assist for the Golden Knights, while Evgenii Dadonov had two assists. Mark Stone scored the other Vegas goal.

Knights goalie Logan Thompson stopped 14 of 18 shots for the 10th win of his rookie season.

Ryan O’Reilly recorded two goals and an assist for the Blues. David Perron and Jordan Kyrou each had a goal and an assist, while Torey Krug had two assists.

O’Reilly’s goals were his 20th and 21st of the season, making him the ninth Blues player to hit the 20-goal threshold. Only four teams in NHL history have had more than nine 20-goal scorers in a single season.

The Blues were 2-for-3 on the power play, continuing their excellent play with the extra attacker. St. Louis is 15-for-47 on power plays over its last 15 games.

Eichel recorded three points in a game for the first time since being traded to the Golden Knights in November.