Giants look to string together wins, starting vs. Tigers 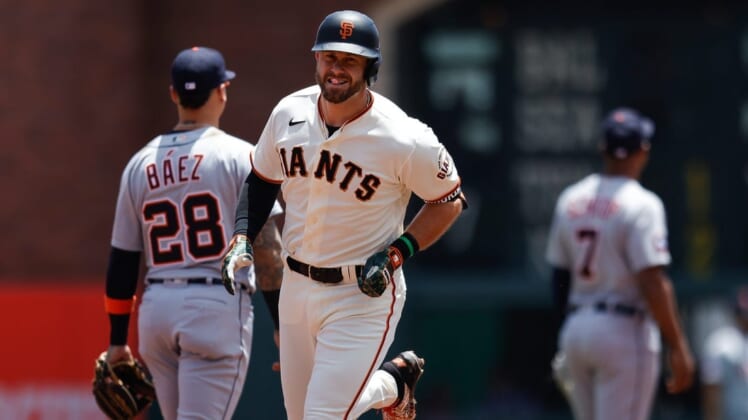 The San Francisco Giants cannot afford any more losing streaks if they want to keep their faint playoff hopes alive.

A successful week against two American League Central clubs would aid their cause.

The Giants, who are one game under .500, begin a two-game road series against the Detroit Tigers on Tuesday. They’ll visit Minnesota for a three-game weekend series to complete an eight-game road trip.

San Francisco halted a four-game slide with a 9-8, 11-inning win over the Colorado Rockies on Sunday. The Giants failed to hold a three-run eighth-inning lead and a two-run 10th-inning advantage before Zack Littell preserved a one-run edge in the 11th.

“It’s good to see because it’s pretty easy to just roll over and quit in games like that when they come back,” third baseman Evan Longoria said. “We’re up, they come back, they tie the game. And here we go again. We’ve been struggling. There’s a lot of factors where you could just give up. But there are still signs of life in here.”

Longoria’s bat showed signs of life after a rocky season that has included a trio of injured list stints. He delivered his first three-hit game of the season, including a grand slam off left-hander Kyle Freeland, the fourth slam of his career.

“It wasn’t a bad pitch,” Longoria said. “It was a ball off the plate and right at the bottom of the zone. But it was right where I was looking for it.”

Longoria also made some superior defensive plays to help the Giants pull out the much-needed victory.

“He’s still an excellent athlete, capable of changing the game with his glove and his bat and his presence,” manager Gabe Kapler said. “We saw that on display (Sunday).”

Carlos Rodon (11-6, 2.89 ERA) will start for the Giants on Tuesday. The left-hander has pitched well in his last four starts, limiting opponents to four runs in 24 1/3 innings. He gave up just one run and two hits while piling up 11 strikeouts in six innings against Arizona on Wednesday.

Rodon recorded a victory over the Tigers on June 28, holding them to one run in six innings. He’s 5-2 with a 4.91 ERA in 10 career starts against them from his days with the Chicago White Sox.

Rodon will be opposed by right-hander Drew Hutchison (1-6, 4.23), who gave up one run and seven hits in 5 1/3 innings at Cleveland last Monday.

Detroit won the last two games of a three-game weekend series against the Los Angeles Angels. Riley Greene sparked a 4-0 victory on Sunday by hitting a first-pitch, leadoff homer off ace Shohei Ohtani.

“It wasn’t right down the middle,” Greene said. “It was in and down, probably not a good pitch to swing at. But I was on time, I was ready and I got it.”

Victor Reyes supplied a two-run triple and the usually impatient Tigers, who have drawn the fewest walks in the majors (287), forced Ohtani to throw 85 pitches in four innings.

“Our at-bats (Sunday) were arguably as good as they’ve been in a lot of series,” manager A.J. Hinch said. “It was nice to see us not chase. Nice to see us take some walks.”

The Giants and Tigers split a two-game series at San Francisco in late June.