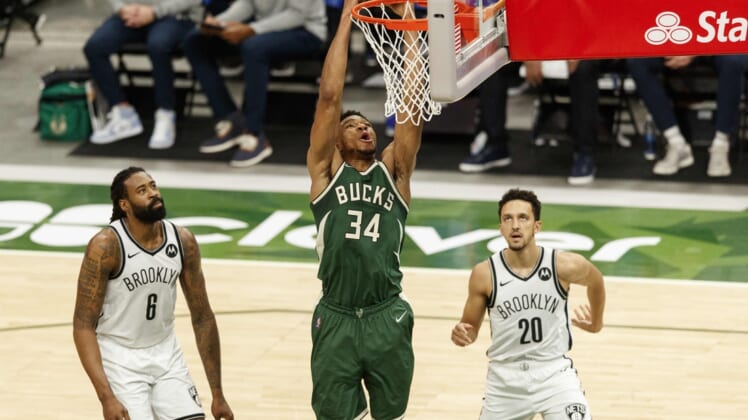 Antetokounmpo, who missed Friday’s game against the Chicago Bulls with an ankle injury, delivered the dunk that put the Bucks ahead for good with 7:57 left. The 49 points were the third-most of his career and his most since he scored 50 points against the Utah Jazz on Nov. 25, 2019.

Khris Middleton had 26 points and 11 rebounds as the Bucks (40-24) maintained their hopes of finishing first in the Eastern Conference for the third straight season. Milwaukee closed within 2 1/2 games of the East-leading Nets (43-22) and Philadelphia 76ers (42-21), who were scheduled to play the San Antonio Spurs later Sunday.

Jrue Holiday had 18 points and Bryn Forbes 12 points for the Bucks.

Durant tied a season-high with 42 points but missed a pair of potential game-tying 3-pointers in the final 30 seconds, including a shot that glanced off the rim just before the buzzer.

The Bucks led by as many as seven in the third, which ended with three lead changes and one tie in the final 1:30. A jumper by Antetokounmpo tied the score at 90-90 before Holiday missed a 3-pointer and Brook Lopez whiffed on a putback just before the buzzer.

Griffin and Shamet opened the fourth with 3-pointers for the Nets, but Middleton scored six straight points to spark the Bucks’ 11-0 run that included Antetokounmpo’s go-ahead dunk.

Milwaukee twice led by seven before the Nets pulled within three points three times. Brooklyn was 0-for-3 on potential game-tying 3-pointers, with Irving missing a chance to knot the score with 1:28 remaining.