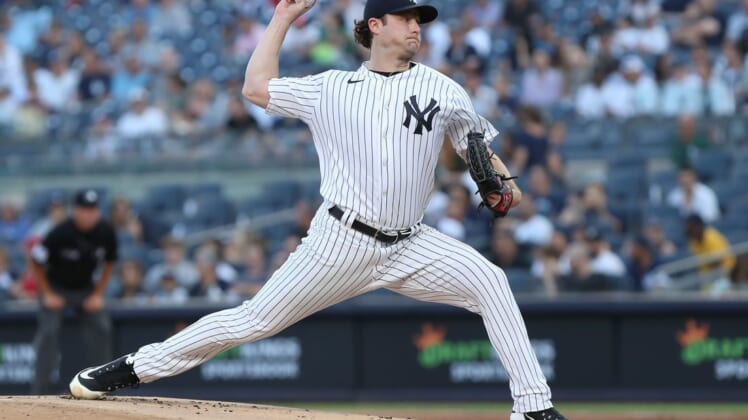 Gerrit Cole bounced back from the worst start of his career to throw six shutout innings for the New York Yankees in a 2-0 win against the visiting Tampa Bay Rays on Tuesday night.

Cole gave up five hits, struck out seven and walked one against the Rays, helping New York win for the 12th time in the past 13 games. Cole had allowed five home runs, including to the first three batters, against the Minnesota Twins on Thursday.

On Tuesday, Cole (6-1) benefited from an overturned call in the sixth inning to help lower his ERA to 3.33.

Rays right-hander Corey Kluber (3-3) also went six innings and did not allow an earned run. He surrendered four hits, struck out three and walked one.

After Giancarlo Stanton walked with one out, right fielder Manuel Margot dropped a high fly ball from Gleyber Torres near the foul line, putting runners on first and second.

Isiah Kiner-Falefa lined a two-out base hit in front of left fielder Randy Arozarena, who overthrew catcher Francisco Mejia as Stanton crossed the plate. The ball went to the backstop, allowing Torres to also score.

Cole allowed a one-out single to Harold Ramirez in the first inning and then retired 11 in a row.

The Rays put their first two batters on base in the fifth and sixth innings, but they couldn’t capitalize off Cole, a four-time All Star.

Cole fielded a comebacker in the sixth, but his throw to second base to start a potential double play appeared to pull Torres off the bag and the runner was called safe. The play was reversed on replay, however.

Tampa Bay loaded the bases with back-to-back singles in the inning, but Arozarena hit into an inning-ending double play to end Cole’s night.

Wandy Peralta and Michael King combined for two innings of shutout relief before Clay Holmes pitched the ninth for his 10th save.