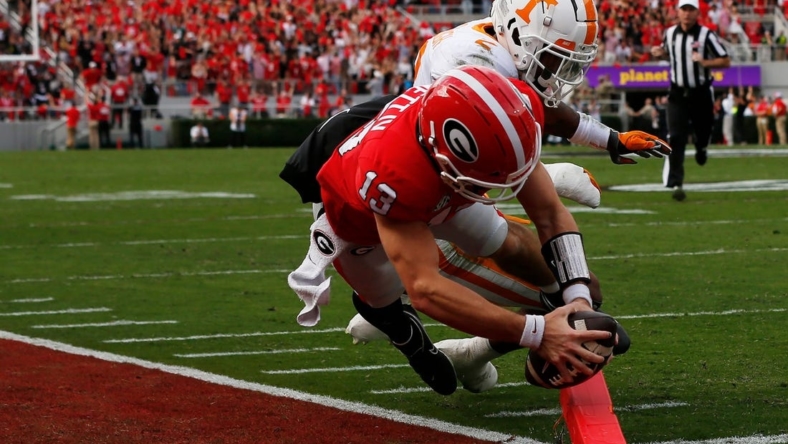 Georgia soared to the No. 1 spot in the second edition of this season’s College Football Playoff rankings after defeating last week’s No. 1, Tennessee.

The Bulldogs were followed by Ohio State, Michigan and TCU in the top four of the new rankings, released Tuesday night. Those are the only four remaining unbeaten teams in FBS college football.

Georgia soundly beat visiting Tennessee 27-13 last Saturday. The Bulldogs, the defending national champions, were No. 3 in the initial CFP rankings. They are 9-0 (6-0 Southeastern Conference) and 27-1 in their past 28 games dating to 2020.

TCU, also 9-0, benefited from losses by Clemson and Alabama, which were both ranked ahead of the Horned Frogs last week, to move up three spots.

Tennessee fell to No. 5. Oregon is No. 6 after its eighth straight win following a Week 1 blowout loss to Georgia. And LSU moved up three spots to No. 7 after the Tigers beat Alabama 32-31 in an overtime classic.

Southern California, Alabama and Clemson completed the top 10. Clemson was shut out for three quarters en route to a 35-14 road loss to Notre Dame. Unranked in the initial poll, the Fighting Irish appeared at No. 20 Tuesday.

The full rankings are below: