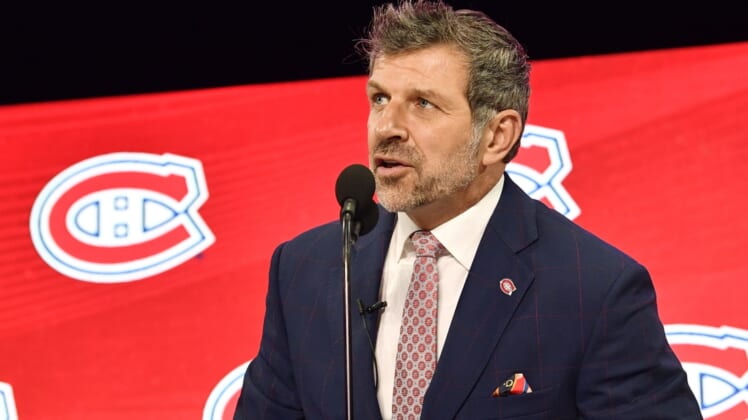 Four games into the 2021-22 season, the good vibes from the Montreal Canadiens’ appearance in last season’s Stanley Cup Finals are gone.

At least as far as general manager Marc Bergevin is concerned.

Bergevin said Wednesday that the Canadiens must “fight through” their struggles and find ways to win.

The Canadiens’ next game is Thursday night at home against the Carolina Hurricanes.

“They’ve got to fight through it,” Bergevin said of his team. “Winners find solutions; losers make excuses. You’ve got to find a way.”

The Canadiens, who lost to the Tampa Bay Lightning four games to one in the Cup Finals last season, have been outscored 15-3 this season in losses to Toronto, Buffalo, the New York Rangers and San Jose.

Despite those woes, Bergevin said he isn’t mulling making any trades in the short term.

“I do like our team,” he said. “There are some pretty good players who are not playing up to their potential, and until they do, there’s nothing I’m going to do to make a change just to make a change.”

Montreal is playing without captain Shea Weber, who is lost for the season because of several injuries he played through during the team’s postseason run.

“For sure we miss ‘Webby’; we can’t hide that, it’s a fact,” Bergevin said. “There’s only one Shea Weber in the NHL, and there won’t be another. He’s a special player, a special individual who brought a lot to the organization.”

The Canadiens also are minus goalie Carey Price, who left the team to voluntarily participate in the NHL/NHLPA player assistance program early this month. Defenseman Joel Edmundson is away from the team, as well.

“Yes, we miss those players, but we’ve got to find a way,” Bergevin said.

The general manager revealed that Edmundson’s father has cancer.

“I don’t know when he’ll be back, Bergevin said. “But he needs to take the time he has with his family.”

The Canadiens’ most recent Stanley Cup title came in 1993.