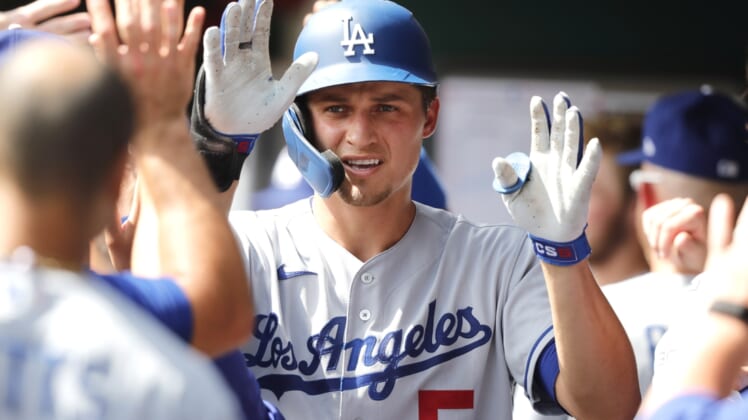 Will Smith, Gavin Lux and Corey Seager homered to lead the visiting Los Angeles Dodgers to an 8-5 win against the Cincinnati Reds in the rubber game of their three-game series on Sunday afternoon.

Lux had three hits and drove in three runs, and Seager had two hits and three RBIs for the Dodgers (96-54), who entered the day two games behind the San Francisco Giants for the National League West lead.

Dodgers left-hander Clayton Kershaw allowed one run and three hits in five innings. Kershaw (10-7) struck out eight and didn’t walk a batter while reaching double digits in wins for the 10th time in his major-league career.

TJ Friedl hit his first major league home run for the Reds (77-73), who entered the day two games behind the St. Louis Cardinals for the second NL wild-card spot. Joey Votto added a pinch-hit homer in the ninth for Cincinnati.

Reds left-hander Wade Miley was lifted after surrendering six runs and nine hits in three innings, matching his shortest outing of the season. Miley (12-7) struck out two and walked one en route to his second straight loss and third this month.

Smith worked a full count off Miley before hitting a solo homer to left with one out in the second inning for a 1-0 lead. It was his 25th blast of the season.

Chris Taylor followed with a single and Lux then drilled a 2-2 slider over the fence in right-center field for his seventh homer of the season and first since June 11, giving Los Angeles a 3-0 lead.

Albert Pujols walked with one out in the third and came home on a two-run shot by Seager — his 10th — for a 5-0 lead. Lux had an RBI single later in the inning to make it 6-0.

The Reds scored on a groundout in the fourth and tacked on another in the sixth on a pinch-hit home run by Friedl to make it 6-2.

Friedl scored on a double by Jonathan India in the eighth, and Nick Castellanos drove in India with a two-out single to cut the deficit to 6-4.

The Dodgers got those runs back in the ninth on a throwing error by shortstop Kyle Farmer and a bases-loaded walk.

Those runs proved big when Votto went deep for the 31st time this season to make it 8-5.