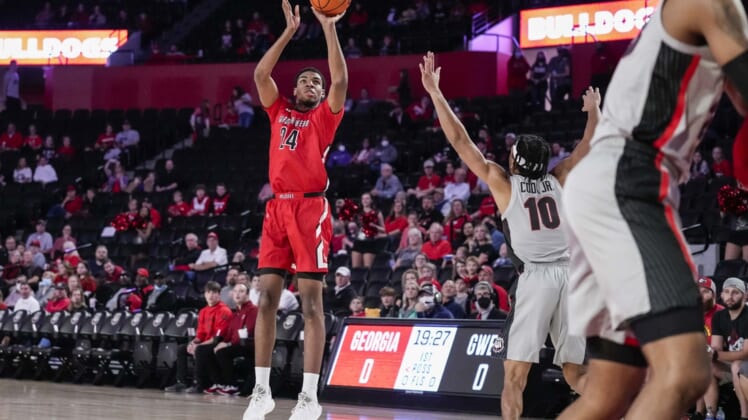 The Runnin’ Bulldogs (6-7) beat Georgia for the first time in five all-time meetings.

Sears, who scored 12 of his points in the first half, finished 5 of 9 from the floor, made two 3-pointers and handed out five assists. Terry shot 3 of 10 but all made seven of his free throws, while Williams finished 7 of 12 from the field and grabbed seven rebounds.

Braelen Bridges totaled 17 points and seven boards but had little help for Georgia (5-8), which shot 37.3 percent and missed 16 of 19 3-point tries. Kario Oquendo added 12 points and Noah Baumann chipped in 11 as Georgia fell for third time in four games and slipped to 5-5 at home, including defeats to Wofford, George Mason and East Tennessee State.

Gardner-Webb took the lead for good 2 1/2 minutes in and gradually pulled away.

Georgia ripped off nine straight points to get within 49-42 on a layup by Bridges with 16:01 remaining but went cold as the Runnin’ Bulldogs surged forward again. The Bulldogs missed 13 of 14 shots and Gardner-Webb opened a 68-47 edge on two free throws by Terry with 8:01 to play.

The Runnin’ Bulldogs took their first 20-point lead when a 3-pointer by D’Maurian Williams made it 71-51 with 5:51 remaining.