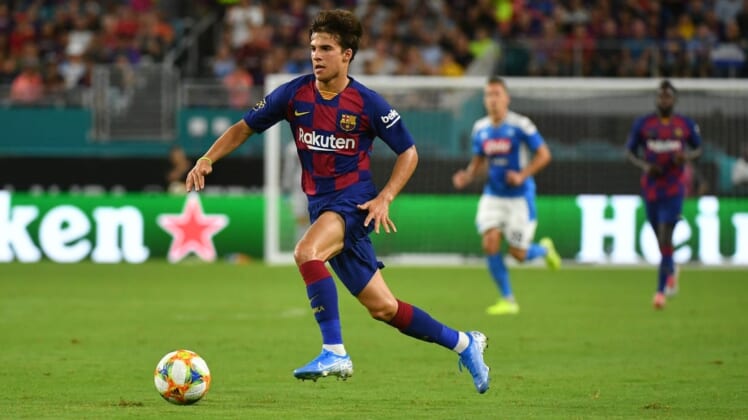 The 23-year-old completed the necessary paperwork earlier this week after being signed from La Liga powerhouse FC Barcelona on Aug. 4.

“His style of play, where he comes from, the fact he is a hyper-aware player, I think the integration with other people isn’t going to be really difficult,” Galaxy coach Greg Vanney said. “It’s something that can happen quickly because I think he fits the profile of the guys we like to have in that position and guys are kind of similar to him.”

Puig joins a team that scored four first-half goals for the first time since 2016 in a 5-2 victory Saturday against Vancouver. Samuel Grandsir scored twice, with Javier “Chicharito” Hernandez adding a goal and an assist and Julian Araujo two helpers for the Galaxy (10-11-3, 33 points), who are seeking just their second playoff berth in the past six seasons.

“We’ve been through a tough stretch, now we’re getting guys healthy, we get Riqui in, now we have to get back to preparation,” Vanney said. “We have to do it one at a time for 10 more games.”

The Sounders (10-13-2, 32 points) are in 10th place in the Western Conference and in danger of missing the playoffs for the first time since joining the league in 2009 after a 2-1 loss at home Sunday against Real Salt Lake.

“Time is running out and we’ve got to figure this out pretty quickly,” said Sounders coach Brian Schmetzer, whose team has lost seven of its past 10 games.

The Sounders are unbeaten in eight straight matches against the Galaxy in MLS play (5-0-3), including a 3-2 victory on March 12 in Seattle.

“This is an experienced roster,” Sounders midfielder Kelyn Rowe said. “We know what it takes to get into the playoffs. We’ve been in situations where it’s not in our favor and we’ve been able to find a way through (to the playoffs) … none of us wants to be on that first team that doesn’t.”