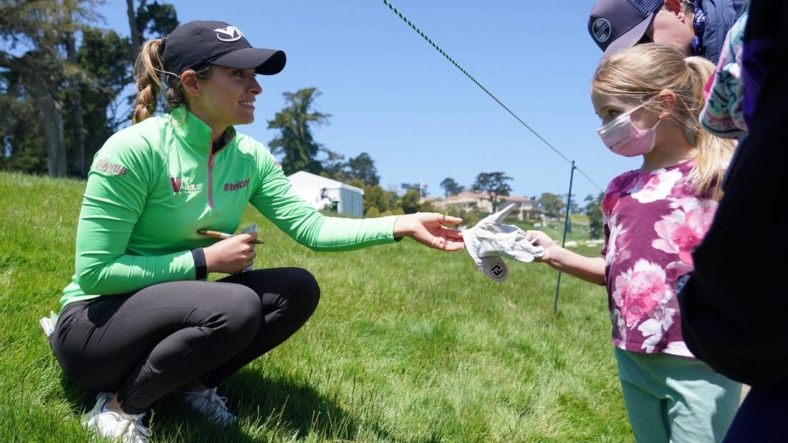 Gaby Lopez birdied the final three holes and shot a scintillating 8-under 63 on Sunday to win the Dana Open in Sylvania, Ohio by one stroke over Megan Khang.

Lopez had eight birdies overall during a bogey-free round to finish at 18-under 266 while posting her third career LPGA victory.

Khang, who shot 64, had seven birdies while also turning in a bogey-free round. Germany’s Caroline Masson (68) finished third at 16 under.

Lopez, a native of Mexico, began the round tied for 11th place and four shots off the lead.

She notched three birdies on the front nine and landed one on No. 10 before moving to 5 under for the round with another birdie at No. 13. Then came the flourish at the finish where she birdied the par-4 16th and birdied back-to-back par-5s on Nos. 17-18 to collect the victory.

After sinking the crucial birdie putt on 18, Lopez celebrated with an emphatic fist pump but felt she couldn’t relax with Khang also playing well. But Khang, who made a birdie putt on 18 a short time later, completed her round one shot shy of Lopez.

“I knew I had to make it because Megan was going to make hers,” Lopez said. “I practiced exactly for this moment. ‘I want to be here, and I’m just going to take care of this putt.'”

The triumph is Lopez’s first since winning the 2020 Hilton Grand Vacations Tournament of Champions in Orlando.

“This is going to sound crazy, but today felt more like a Friday round,” Lopez said afterward. “Having that calmness and having that quiet space was exactly what we been working on. It has paid off.”

The 28-year-old Lopez shot a 66 in Saturday’s third round to remain in the hunt.

Lopez, a two-time Olympian, then stepped it up during Sunday’s round to outlast Khang.

“I mean, definitely there is always that little bit of disappointment, but Gaby played an amazing round as well,” Khang said. “… A lot of mixed feelings, but I gave myself chances, and just going to take what I learned from this week and carry it on for my career.”

Li entered Sunday with a one-stroke lead but there wasn’t much sizzle in her final round.

“There is lots of lessons to be learned, but today I hit it good and I just couldn’t get a lot of the putts to fall, honestly,” Li said.

Lydia Ko of New Zealand also tied for 16th after a final-round 71. She was tied for fourth entering the day.