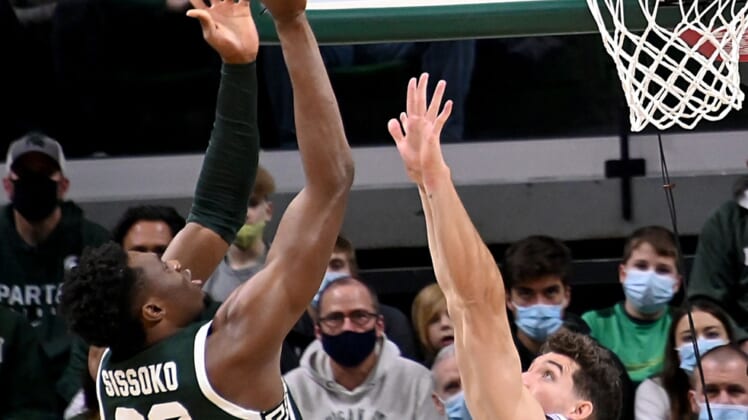 Gabe Brown had 24 points and seven rebounds as No. 10 Michigan State extended its winning streak to six games by pulling away from High Point, 81-68, at East Lansing, Mich., on Wednesday afternoon.

Jaden House led the Panthers (6-7) with 18 points. Zach Austin had 15 points, eight rebounds and four assists and Bryson Childress added 12 points. The Spartans had a 38-25 rebounding advantage and 17 fast-break points.

The Panthers led 35-34 at halftime behind House’s 11 points.

The Spartans, who had played only one game since Dec. 11, missed their first eight field-goal attempts. A Hauser layup ended the drought nearly five minutes into the game but the offense remained sluggish.
Childress made a 3-pointer midway through the half to tie the game at 13. The Spartans followed with a 7-2 spurt, capped by Hall’s 3-pointer.

Michigan State couldn’t extend the lead to more than seven points. Childress knocked down another 3-pointer with 3:14 left in the half to tie it again at 30.

Hauser hit a 3-pointer in the opening minute of the second half. Michigan State clung to a slim lead from that point until Austin’s 3-pointer with 12:02 to go gave the Panthers a 50-49 edge.

With nine minutes left and the score tied, the Spartans had a 9-2 spurt, including a pair of 3s from Brown.

High Point didn’t get closer than four points the rest of the way. Michigan State established its first double-digit advantage, 74-63, on a Hall dunk with 3:55 remaining.