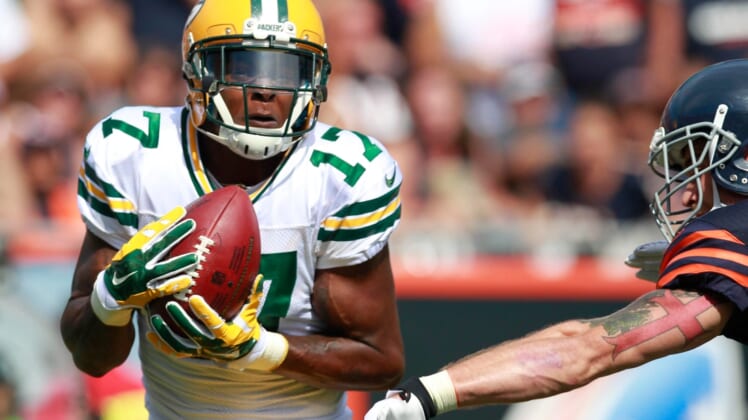 Green Bay Packers wide receiver Davante Adams (17) hauls in a touchdown pass that was call back due to a holding penalty during the 3rd quarter of their 38-17 win Sunday, September 28, 2014 at Soldier Field in Chicago.Mjs Packers29 10097 De Sisti Sisti

The Packers used the franchise tag to retain Adams, hours after Aaron Rodgers confirmed he would return for the 2022 season. Adams was one of five NFL players to receive the tag Tuesday before the 4 p.m. ET deadline and one of eight in all.

Adams exceeds the franchise tag tender value for wide receivers and would make more than $20 million in 2022 under the tender. Because his cap hit was almost $16.8 million in 2021, his franchise number is $20.1 million.

The Packers and Adams are reportedly “not close” to a long-term contract. Adams openly insisted he should be the NFL’s highest-paid wide receiver, a contract general manager Brian Gutekunst said the All-Pro deserves. The sides have until the July 15 deadline to reach a long-term deal.

–The Tampa Bay Buccaneers used the franchise tag to keep wideout Chris Godwin for the second consecutive year. The two sides can negotiate a long-term deal by July 15 under the terms of the tag.

Last March, the Buccaneers applied the “non-exclusive” franchise tag on Godwin, meaning he was able to discuss a contract with other teams. Tampa Bay retained the right to match any contract offer.

Godwin, who is recovering from a season-ending knee injury, would earn approximately $19.2 million on the tag in 2022 if the two sides can’t work out a long-term deal.

The 26-year-old Godwin caught a career-high 98 passes for 1,103 yards and five touchdowns in 14 starts in 2021. He tore the ACL and MCL in his right knee in a Week 15 loss to the New Orleans Saints. Godwin is expected to miss training camp and preseason, but he could be back for the start of the regular season barring complications in his recovery.

–Tight end Dalton Schultz was tagged by the Dallas Cowboys, guaranteeing his 2022 salary at $10.931 million.

Schultz, 25, was a fourth-round pick in 2018 and caught 78 passes for 808 yards and eight touchdowns last season. The Cowboys are uncertain whether fellow tight end Blake Jarwin (hip) will be available to start the 2022 season.

The Cowboys also announced that they created $22 million in cap space by restructuring the contracts of quarterback Dak Prescott and offensive guard Zack Martin as the new league year approaches. The team saved $15 million on Prescott’s deal and $7 million on Martin’s by converting a portion of their 2022 salary into a signing bonus.

Prescott had a passer rating of 120.0 when targeting Schultz since 2020, according to the Cowboys.

Like Schultz with the Cowboys and David Njoku with the Cleveland Browns, Gesicki will make $10.931 million in 2022 salary once the tender offer is signed.

Gesicki, 26, recorded career-high totals in both catches (73) and receiving yards (780) to go along with two touchdowns in 17 games last season. Gesicki has 199 catches for 2,255 yards and 13 touchdowns in 64 career games since being selected by the Dolphins in the second round of the 2018 NFL Draft.

Robinson has started all 61 games he has played for the Jaguars since they selected him in the second round of the 2017 NFL Draft.