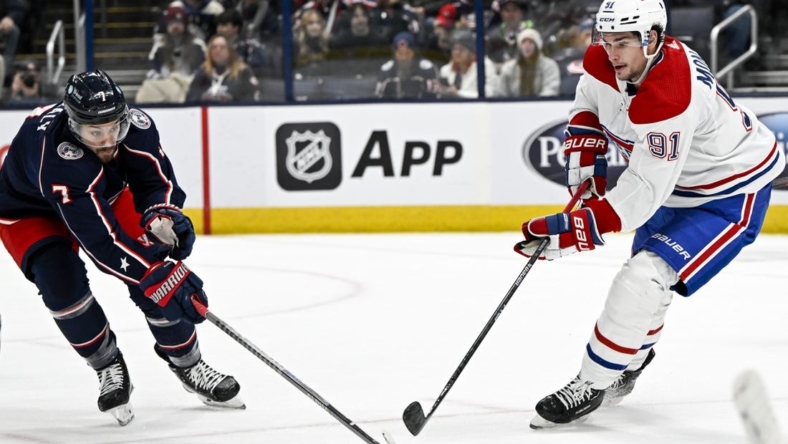 Sean Kuraly scored twice, including a tiebreaking goal in a frenetic third period as the Columbus Blue Jackets skated past the visiting Montreal Canadiens 6-4 on Thursday.

Kuraly’s empty-net goal with 2:12 left capped a four-goal third period for Columbus, which won for the third time in four games (3-0-1) following a five-game losing streak.

Kuraly, who also added an assist, powered his way by Montreal defenseman Jordan Harris and capped a brilliant rush up ice by beating goalie Sam Montembeault and snap a 3-3 tie at 10:09 of the third.

Exactly 60 seconds later, Kuraly won a faceoff directly to the stick of Mathieu Olivier, who fired a wrist shot from the right circle over Montembeault’s right shoulder for a two-goal lead.

That two-goal lead lasted only eight seconds as Nick Suzuki fired a wrister past Columbus netminder Joonas Korpisalo, who stopped 38 of 42 shots for his third win in four starts.

Montembeault made 23 saves for Montreal, which lost its second straight after a three consecutive wins.

Boone Jenner’s team-leading seventh goal of the season came at the end of a perfectly executed odd-man rush started by Johnny Gaudreau to give the Blue Jackets a 3-2 lead 6:36 into the third period.

Cole Sillinger and Gustav Nyquist scored in the first period to give Columbus a 2-0 advantage after 20 minutes.

The second period belonged to Montreal. Harris atoned for a Columbus goal off his shoulder when took a rebound and beat Korpisalo glove-side at 13:35 for his second career goal and first this season.

Then, as the second period was ending, Josh Anderson skated across the circles and burned his former team with 2.1 seconds left with a wrist shot that beat a screened Korpisalo five-hole. The power-play goal tied the game 2-2 heading into the third.

The game was officiated with just one referee for the final 30 minutes after Furman South had to leave for medical attention on his lower left leg. South was initially injured when Montreal’s Evgenii Dadonov cross-checked Andrew Peeke into his left ankle.

Then just before the Harris goal for Montreal, Kaiden Guhle checked Sillinger into South. After the Harris goal, South left the game for medical treatment.