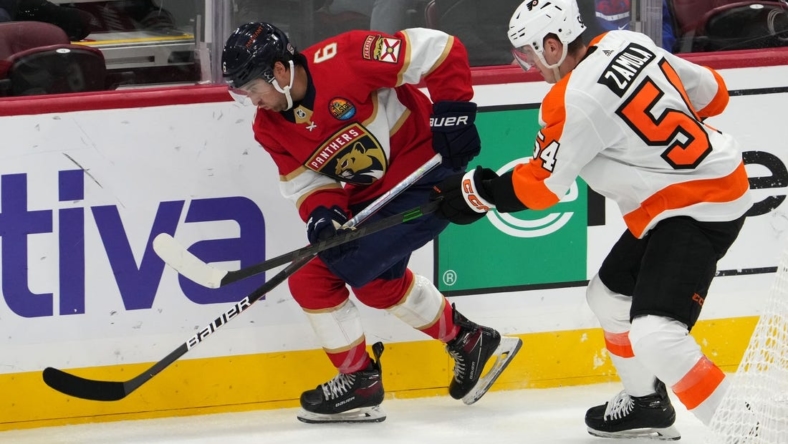 The Philadelphia Flyers have many reasons to be optimistic following a surprising start of four wins over their first six games.

But they also have to deal with the bitter reality of losing James van Riemsdyk with a fractured finger for at least a month.

The short-handed Flyers will host the Florida Panthers on Thursday without van Riemsdyk, who has compiled two goals and three assists in six games.

“It hurts. It hurts our power play, it hurts some of the balance of your lines,” Flyers head coach John Tortorella said. “He has been a good player. Nothing we can do about it now.”

The Flyers will look to respond following a 3-0 home loss to the San Jose Sharks on Sunday.

The Flyers are also playing without Cam Atkinson, who has not skated this season after a 23-goal performance a season ago. Sean Couturier and Ryan Ellis are also out. Owen Tippett and Rasmus Ristolainen practiced Tuesday, though the status of each player is unclear for Thursday.

Look for Scott Laughton to take on a bigger role, especially without van Riemsdyk on the power play.

“He’s a bigger body, but he’s always in the right spot, he gets his stick on everything,” Laughton said of van Riemsdyk. “I think he has been the best guy in the league for a while in front of the net like that. I don’t think you can really replicate it, but try to do some little things at the end of practice and stuff like that.”

The Panthers fell 4-2 to the Chicago Blackhawks on Tuesday.

Florida trailed 3-0 before mounting a comeback with 15 shots on goal in the third period.

“We battled until the end, but we had to because we were so bad in the first two periods,” Matthew Tkachuk said. “We put ourselves in a terrible position. It was definitely our worst two periods of hockey this season.

“We’ve got the talent that when we play the right way and are playing aggressive and not sitting back and being smart with pucks, we can do what we did there in the third and take over a period and give ourselves a chance to win.”

The normally electric Panthers struggled on the power play, going 0-for-6.

Still, the Panthers have compiled four wins in seven games, including a 4-3 victory over the Flyers on Oct. 19.

“This is a two-game road trip, and we’re not a team that’s going to lose two in a row,” Tkachuk said. “That’s our mindset. Would’ve loved to get the first one to set up the road trip, but now we’ve got to really grind out a tough one against Philly. After we beat them last week, they’re going to be coming for us, so we have to be better.”

Aaron Ekblad (groin) is expected to be sidelined for a fourth consecutive game.