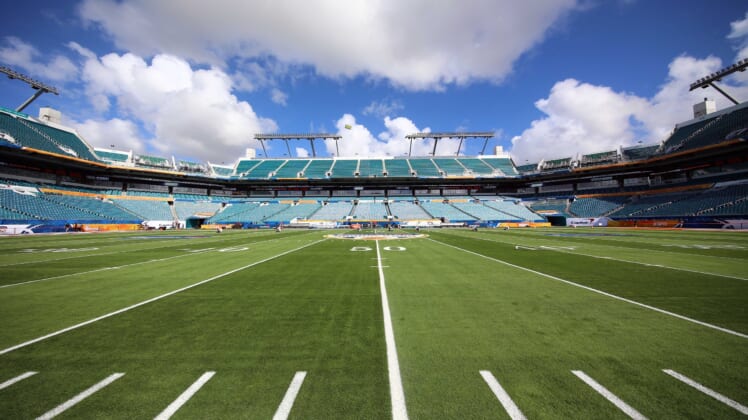 There’s a chance that Hard Rock Stadium in Miami could be rocking big time later during the 2020 NFL season. With the league taking every precaution during the ongoing COVID-19 pandemic, a majority of teams are not hosting fans during the early stages of the 2020 campaign.

That could soon change in South Beach if Florida Governor Ron DeSantis (R) has his way.

That seems to be somewhat of a backwards approach amid a pandemic that’s growing in size around the United States and during a time in the year that experts believe said growth will only be magnified.

As for the state of Florida, there’s been 720,000 confirmed cases and 14,766 deaths since the COVID-19 pandemic hit the American shores early this year. As of Wednesday afternoon, Florida had recorded 2,251 new cases over the past 24 hours.

With that said, the Dolphins are said to be taking a conservative approach to this. They will still limit capacity to 13,000 fans for their next home game against the Los Angeles Chargers Oct. 25. This all comes with concern over the NFL season due to multiple COVID-19 outbreaks.

We’re seeing major outbreaks of the virus within the Tennessee Titans and New England Patriots organization. Thus far, 24 members of the Titans have tested positive for COVID-19. Their Week 4 game against the Pittsburgh Steelers was postponed for later this month due to said outbreak.

As for the Patriots, both Cam Newton and Stephon Gilmore have tested positive for COVID-19. Their Week 5 game against the Denver Broncos is now up in the air.

But by all means, let’s go ahead and have 65,000 fans in attendance for an NFL game. That makes total sense. Insert face palm GIF here.

It will, however, be interesting to see what the Dolphins do now that DeSantis has given clearance for full capacity at Hard Rock Stadium moving forward.