The slate of games being featured in NFL Week 15 offers fans plenty of opportunities to root for the underdog.

Is there any way the Chicago Bears can beat the Green Bay Packers? We say yes, as crazy as that sounds. What about the New England Patriots visiting the Denver Broncos? Oh yeah.

These favorites are among those in danger of being upset in NFL Week 15.

On paper, in a vacuum, there is no way the surging Packers should lose to the Bears, who’ve won just three games all year. But this game isn’t being played on paper, or in a vacuum. It’s being played at Soldier Field, where the temperature is set to be in the single digits and it’s going to be windy to boot (more on that here).

It’s literally going to be a frozen tundra, and anything can happen on such a field. Playing in conditions like this, running the ball well is likely going to be the key to victory.

And with three weeks left to play, the leading rushers for Green Bay remain Eddie Lacy (on IR), Aaron Rodgers and Ty Montgomery, who is a receiver. James Starks is a shifty back who can sometimes break off big gains, but he is not an ideal back when it comes to pounding the rock.

On the other side, rookie Jordan Howard has proven to be quite the steal as a fifth-round pick out of Indiana. He needs just 31 yards to eclipse 1,000 yards and has scored six total touchdowns.

The Packers have been solid against the run this year but have also allowed some big performances by run-first teams.

If Rodgers and Co. struggle to make hay through the air, don’t be surprised if the Packers ends up dropping a game to their NFC North rival.

Given the way these two teams have played throughout the 2016 season, it’s safe to assume the game being contested at MetLife Stadium on Sunday will come down to the wire. Both have engaged in many a close battle this year, but in such games the Lions have proven to be historically victorious (more on that here).

A legitimate MVP candidate, Matthew Stafford has shown unprecedented resiliency and has willed his team to victory in the final stanza in all but one of the team’s nine wins.

On the other side of the field is Eli Manning, who continues to be about as consistent as a toddler learning how to put food in its mouth with a spoon. The Giants have sometimes won in spite of Manning this year, and he’s downright lost them games because of his tendency to throw the ball to the other team.

The weather will be a factor in this game as well. The forecast calls for rain all day and winds around 15 miles per hour.

Both teams struggle to run the ball, ranking in the bottom five of the league. New York’s defense has been outstanding of late. Then again, Detroit’s defense has been shutting teams down as well, allowing just 15.6 points per game the past five games.

This game will come down to the play of these two quarterbacks in the rain. It’s going to be a nail-biter, but we’re giving the edge to Stafford and the Lions to snatch out another victory out of the jaws of defeat. 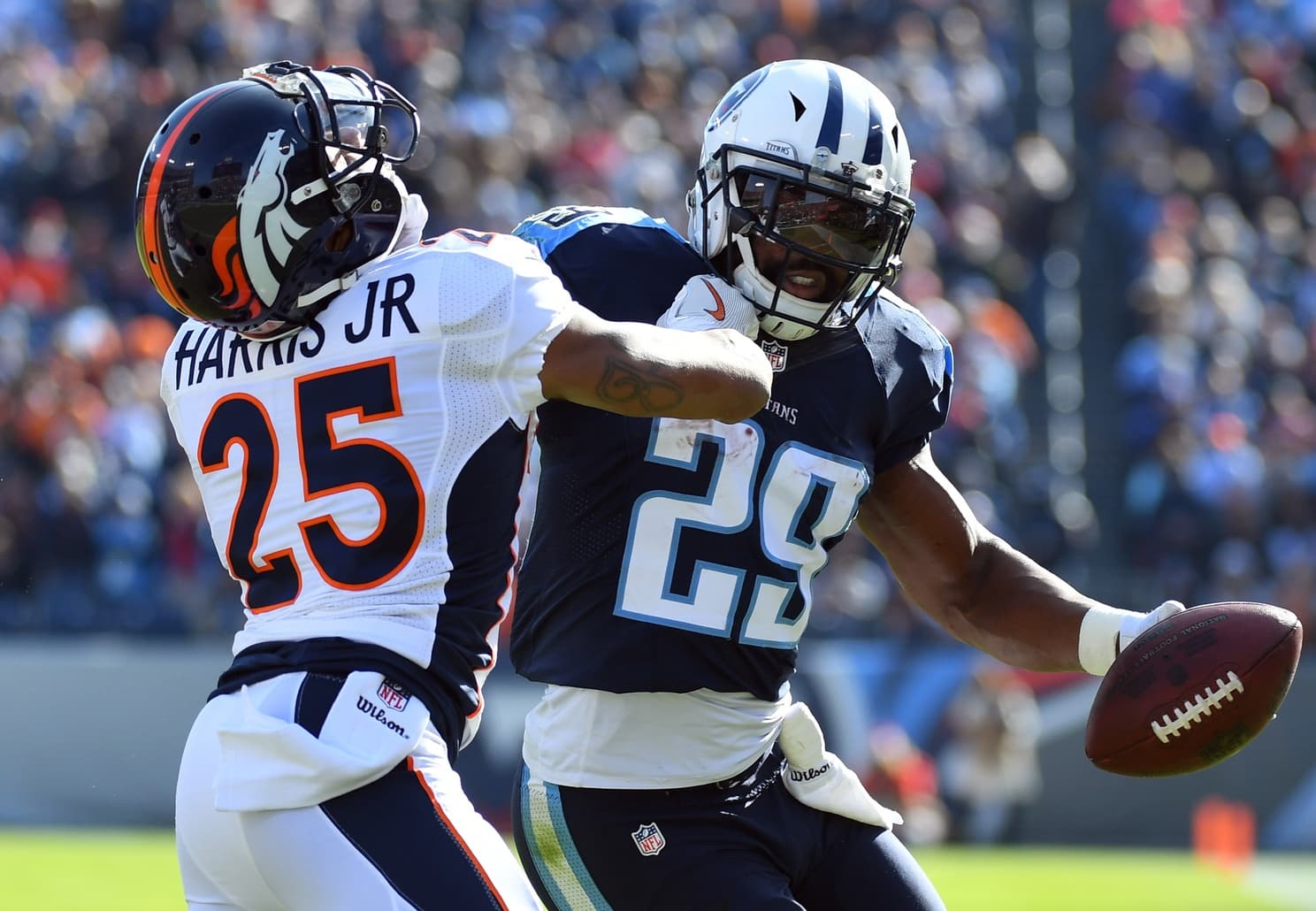 There is one simple reason to believe the Titans can upset the Chiefs Sunday at Arrowhead Stadium: The Titans are among the best in the league at pounding the ball down the throat of opposing defenses, and Kansas City is among the league’s worst at stopping the run.

Even in the Chiefs’ impressive victory against the Oakland Raiders last week, Kansas City gave up 135 yards and a touchdown on the ground. And if Derek Carr had been anything like his normal self, the Raiders would have won.

The Titans are coming off an impressive win against the Denver Broncos. Their defense features two pass rushers with at least nine sacks. They also have the impressive running back duo of DeMarco Murray (No. 2 in the league behind Ezekiel Elliott) and rookie Derrick Henry. Marcus Mariota has been one of the most impressive quarterbacks this year, throwing 25 touchdowns and just eight interceptions.

The Chiefs have their hands full, to be sure.

If Tennessee’s defense shuts down Spencer Ware, then a win is likely in the bag. The big X-factor is, of course, Tyreek Hill. He’s been a huge weapon for Alex Smith and Andy Reid this year and could be the difference in the game.

Of all the places around the NFL that Tom Brady doesn’t love to play, Denver tops the list.

While Tom Brady hasn't struggled in many places, Denver hasn't been too hospitable pic.twitter.com/bbDA1F8BUc

Brady will obviously be without Rob Gronkowski, who’s on IR after back surgery. He’ll once again be without Danny Amendola as well, as the slot specialist continues to rehab from an ankle injury. As we saw on Monday night against the Baltimore Ravens, New England’s offense can put points on the board without these playmakers, but it can also stall against resistance.

Speaking of resistance, Denver’s defense continues to be among the league’s best at keeping opposing teams from moving the chains and scoring, allowing just 18.6 points per game this year.

Trevor Siemian is not going to light up the scoreboard, but he might not have to for the Broncos to win.

The biggest key in this game for both teams revolves around Patriots running back LeGarrette Blount. If the Pats can get the big back going, then they’ll have a chance to pound out a win win. However, if Denver’s front seven can keep him from running wild, then the Broncos will win. 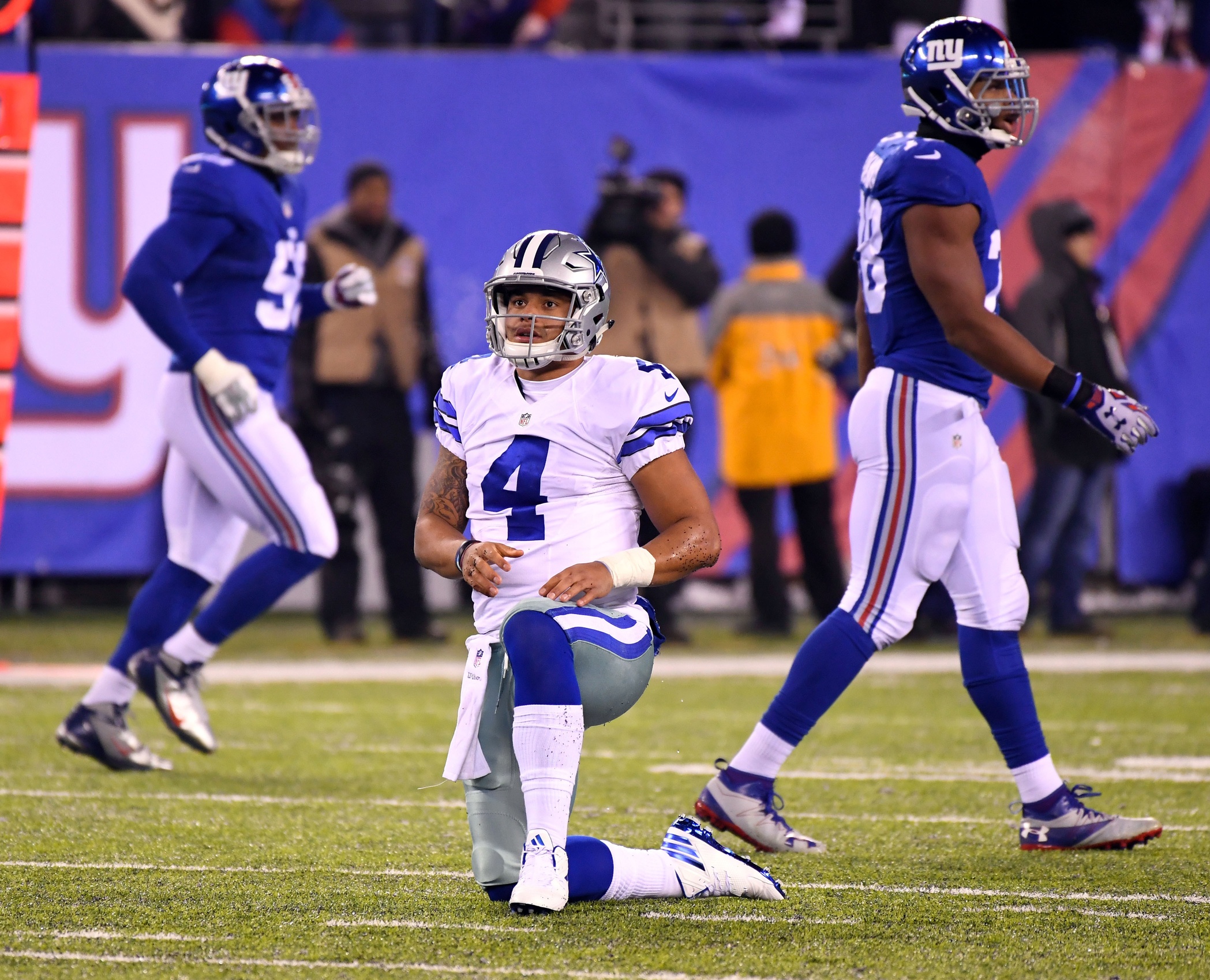 If the Bucs come into this game and play defense like they have during their five-game winning streak, then Dallas will lose two games in a row for the first time all season. Humbling the likes of Russell Wilson, Drew Brees and Philip Rivers, Tampa Bay’s defense has been a turnover machine during this stretch of wins and now has 14 interceptions on the year.

Meanwhile, Jameis Winston continues to mature into a prolific passer and offensive leader. His connection with Mike Evans has been a joy to watch, and it’s kept fantasy football owners delighted all year. Tampa Bay also has running back Doug Martin back in action, which gives them excellent balance on offense.

On the other side of the field is a Cowboys team that has shown chinks in the armor for the first time all year. They barely escaped with a win against the Minnesota Vikings in Week 13 and then put up a stinker of a performance offensively against the New York Giants last weekend.

Dak Prescott was rattled in both of those games, completing just 52.7 percent of his passes with two touchdowns and two interceptions. The Giants really got to him last Sunday, sacking him three times and making him uncomfortable with nine total quarterback hits.

The Bucs are a team that could replicate the pressure that caused Prescott to stumble. And if they keep Ezekiel Elliott from going crazy on the ground, a win is in the bag.